October will soon be upon us, and that means much more entertainment is to be had than mere haunted houses.

If you’re seeking something utterly unique, then consider paying a visit to “Theatre Macabre,” the latest immersive production from the twisted minds behind “The Tension Experience” and “The Lust Experience” (collectively, “The Experiences”).

What is “Theatre Macabre?” Nobody knows for certain.

Creators Darren Lynn Bousman, Clint Sears and Gordon Bijelonic remain tight-lipped as to specifics. The website informs us that it’s contemporary version of the famous “Le Théâtre du Grand-Guignol,” a Paris playhouse formed in the turn of the century that ran for nearly 70 years and featured nearly all of society’s taboos.

These artisans proudly put a spotlight on the people and subject matter that the rest of polite society was too afraid to talk about let alone embrace.”

Lest we be offered too much detail, the website goes on to say that “At Theatre Macabre hilarious, shocking and electrifying vignettes await at every turn but so do the purveyors of these dark arts and they may, or may not, have your best interest in mind. Ever increasingly, the line between what is real and what is simply unsettling entertainment will become more and more divided as the night wears on. The audience will find themselves dragged away from and into the show itself as the narrative transforms to make them the lead of their very own terrifying and intoxicating stories.”

Given how intoxicatingly real “The Experiences” felt to me, I thought I’d at least try to weasel something out of the creators — especially since I’d discovered that two of my closest friends had been mysteriously shanghaied into the production.

Here’s my interview with the Creators, such as it is:

Why ‘Theatre Macabre’ and why now?

Darren had this idea to explore the Grand-Guignol, and Gordon and Clint were instantly excited and on board, so it was a matter of wrapping the immersive experiences around it.

Who is best suited for this show and why?

We think everyone who wants to have an exciting night out that can’t be replicated by any other medium. There are so many different forms of entertainment and adventures to explore, you’d be hard pressed to find anyone who won’t have a good, or at the very least, extremely memorable time at “Theatre Macabre.”

Have you ever decided after an immersive show that you could have gone further and/been more provocative? Discuss.

We are extremely thoughtful and careful about how far we push the audience, and like to think we do a 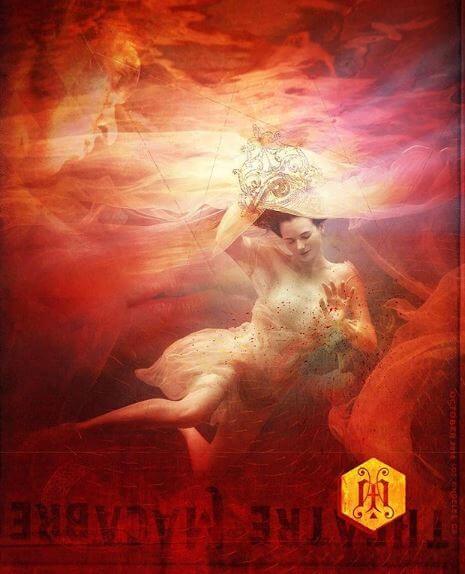 good job of pushing the envelope where it needs to be. We also adjust anything that we need to in the pre-testing and, if need be, in real-time during the run. We are quick to adapt, but we do often get ideas during the show that are sometimes a little too large to pull off in the moment, or tonally not correct for the current piece that will then be pushed to the next project.

David Mamet says “we respond to a drama to that extent to which it corresponds to our dream life.” Agree or disagree and why?

You can’t disagree with Mr. Mamet, right? Perhaps we can expound on how a drama resonates with our audience, though. The theme of a lot of our work is stripping down a person to their essence, and exciting immersive theater (by its nature) allows people to truly live in the moment. So to paraphrase, we could say that our drama often generates a deep and meaningful response for people because we are able to push them to discover who and what they are in extraordinary situations.

The original Grand Guignol theatre’s director judged a show’s success by how many people passed out from shock. This begs the question: what will YOU consider success?

Audiences have grown fairly comfortable with the truly shocking, but that’s when it’s on the big screen. However, when it’s unexpected, or well-executed in the real, actual world in front of you; when you can see, hear and feel the energy that’s going on a few feet away, that might be a different story completely.

Sabrina Kern appeared in both of The Experiences, and is involved in Theatre Macabre. You just can’t seem to quit her. Discuss.

She is not just a gifted actress, she has a mind for the big picture and the narrative itself. When it came time to get some support for the writing because of the scope and time of the show, she was an easy choice.

And just when I got Stephanie Hyden out, you pull her back in. Discuss.

Stephanie is a rock star, and wears so many hats in the spotlight and behind the scenes. We don’t know how she does it. We’d be lost without her.

And what’s all this about the beat writer for immersive theatre at TheVerge.com, Bryan Bishop, being involved?

There isn’t a bigger immersive theater fan in the world than Bryan Bishop. We know he can write, and he’s got a sharp, analytical mind that is always studying why and how things are working. He’s going to be a real asset to us.

I see the multi-talented Morgan Rooms is also returning?

Morgan is our Swiss Army knife. Not only does he always give more than asked for, but calms us with his warmth and humor. He makes art, videos, crazy puzzles, acts – he’s an incredible actor – and hopefully soon, some awesome music again. He’s can do everything and is one of the most talented people around.”

Hold on. These people are all my closest friends! Is there a conspiracy?

Are you beholden to whom David Milch refers to as “The Bosses?”

We are only beholden to continually top ourselves and learn from everything we do so that we are always creating the best show we can….and the Clockmakers.

A certain Jungian analyst told a certain patient that immersive theatre allows one to step into the unconscious. All kinds of things are activated there. Do you think immersive, by design, requires greater post-show reflection than other media?

We do post-experience interviews with all of our test groups, and they always appear as if they are coming out of a very vivid dream, like it’s taking their brain awhile to come back to reality. It can often be hard to get them to describe their feelings for a moment. Between that, and what we know about what we try to illicit from the audience, it sounds like this analyst of yours nailed it.

I didn’t say it was my analyst.

See in re: “conspiracy”.

Will I or anyone else fear for their lives in “Theatre Macabre”?

It depends on your actions and beliefs while you are in the theater.

Is death the end?

“Theatre Macabre” runs Oct. 4 through Nov. 4 in Los Angeles, at a location that will be disclosed to guests a few days before each show. Tickets and other information are available at Event Brite as well as the production’s official page, www.theatre-macabre.com and at the show’s Instagram page. It was nice knowing you.