“It’s a sign of a being a grown up to laugh at something you don’t agree with,” Balaker says.

By his definition, we’re running dangerously low on grown ups.

Balaker’s upcoming documentary, “Can We Take a Joke?” asks some of the biggest names in comedy if we’ve lost our collective sense of humor. Adam Carolla, Gilbert Gottfried, Penn Jillette, Lisa Lampanelli and others describe how political correctness has damaged their industry.

Penn Jillette on Being Offended - Outtake from 'Can We Take A Joke?'

In recent weeks we’ve seen both liberal and right-leaning comics slam the PC police. Ironically, one of the least ideological stand-ups, Jerry Seinfeld, ignited the blowback last year when he shared why he doesn’t perform at college campuses anymore.

That cheers Balaker, whose film traces Lenny Bruce’s tragic tale as necessary context to the debate. Police hounded Bruce for years due to the mature nature of his act. He even spent time in jail for sharing “obscene” material on stage.

“He’s the Godfather of modern comedy, and he was very much a man of the Left,” Balaker says, noting Bruce’s critiques of religion and race-based commentary. “He wouldn’t last a minute on the modern college campus.”

Most of today’s “outrage industry” hails from the Left, but he notes liberals like Tina Fey and Chris Rock have spoken out against it.

Balaker’s team sought out comics “who were sticking their necks out” on the issue of political correctness. He landed some big stars, but not everyone on his wish list agreed to be interviewed.

“If you’re a ‘name’ comedian you have to be careful about what you say yes to,” he says. “They have to make a living.”

At a time when even a comedy icon like Steve Martin can get blasted for Tweeting the “wrong” joke no one is safe. And gigs can disappear as a result.

Gottfried lost a lucrative Aflac deal in 2011 after Tweeting an admittedly coarse series of jokes tied to a deadly tsunami. Those jokes were certainly tasteless, but what about comedians trying to bring light to serious matters through humor? Say the wrong thing, or simply get misinterpreted by someone with a big enough Twitter following, and the fallout can be considerable. 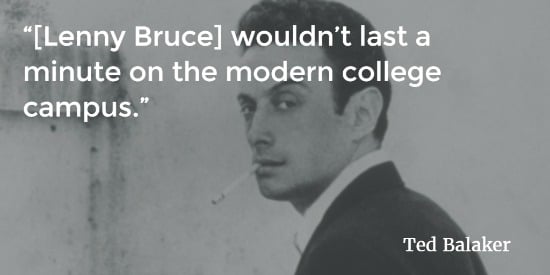 “Gilbert says most people have a brain and don’t get offended. The people who do are louder,” Balaker says. And some use their social media might to shut down those with whom they disagree. Balaker has a warning for those who wield a PC club for political gain.

“Your team may be in charge now, but you don’t know what the future will bring …be mature enough to let people speak,” he says.

FAST FACT: An NPR host once tried to paint Adam Carolla as a racist for “stereotypical” Asian jokes on his popular podcast. Turns out Carolla didn’t crack the jokes in question. Asian-American comic Jo Koy did.

The subjects of “Can We Take a Joke?” make a living through humor, but this is no laughing matter.

“They’re on the front lines of the battle for free speech,” he says of modern stand-ups. “It doesn’t just stay in the comedy club or the college campus. The outrage impulse spreads out into society.”

Consider PR executive Justine Sacco, whose sad story is part of the “Joke” narrative. The 30-year-old sent out an insensitive tweet before flying to South Africa in 2013. “Going to Africa. Hope I don’t get AIDS. Just kidding. I’m white!”

She lost more than her job. She became a cultural pariah.

Workers were threatening to strike at the hotels she had booked if she showed up. She was told no one could guarantee her safety.

That outrage impulse, Gottfried has said, has some patting themselves on the back for being “good” people. Here’s betting Sacco may not agree.

Comedy, Outrage, and College: What We Saw at the "Can We Take a Joke?" Premiere

“Can We Take a Joke?” screened in New York City in November and will play at the Sun Valley Film Festival March 4. Balaker is currently mulling a number of possible distribution deals. One thing is certain. He wants to take “Joke” to what he dubs “Ground Zero” – college campuses.

He hopes even the film’s critics will talk about the subject … seriously.

“There are things in the film that offend me. If we listed everybody’s sacred cows what would we be left with? Jokes about airline food?” he asks. “In Europe people get thrown in prison for denying the Holocaust. Our First Amendment protects crackpots, and thank goodness for that.”

From Banned to Backlash

Timing is almost everything when it comes to movies. And Balaker can’t believe how closely his film aligns with the growing distaste over our PC times.

“I’ve never been involved in a project that feels as timely as this one … almost every day there’s an explosion of outrage,” he says.