A trio of GOP congressmen suspected they were the stars of “The Swamp,” a new HBO documentary detailing attempts to “drain” Beltway corruption.

The documentary’s key player is a liberal law professor who sculpts both the narrative and moral tone. Anyone who’s seen HBO’s politically-biased projects, from movies (“Game Change”) to TV fare (“Last Week Tonight”), shouldn’t be surprised.

Why didn’t these smart, savvy congressmen see it coming?

For the first hour, “The Swamp” not only humanizes three GOP players but offers a mostly fair look at Beltway dysfunction in the modern era.

We meet Rep. Matt Gaetz (R-FL), Thomas Massie (R-KY), and Ken Buck (R-CO) as they attempt to shake up Congress. They’re up against an entrenched system that resists them at every step.

Gaetz, who scores the most screen time, balances his fealty to President Donald Trump with a passion for progress. Massie drives an electric car and lives off the grid back at his Kentucky home. Buck, who endured a serious cancer diagnosis, assumes elder statesman status.

“The Swamp” does something that many other documentaries might avoid. It showcases their humor and back stories, rendering them as flawed but three-dimensional figures.

Yes, they’re Beltway denizens down to their toes, or in Gaetz’s case his Ivanka Trump-approved shoes. They still see the gargantuan flaws in our democracy and crave a course correction. 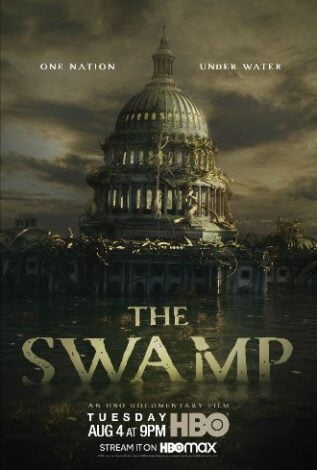 The narrative begins with Democrats taking back the house in the winter of 2019 and runs through the Trump impeachment circus. Directors Directors Daniel DiMauro and Morgan Pehme (“Get Me Roger Stone”) make the byzantine hoops they jump through clear and precise.

Even those unfamiliar with government excess will track why the current system is so flawed, so intractable.

Massie emerges in the most positive light, from his earnest green measures to his lack of Trump fawning. Still, when he shares his views on the role Carbon Dioxide plays on the environment the film abruptly shifts to extreme weather footage, as if by simply disagreeing with part of the Climate Change mantra he’s helping destroy Mother Earth.

That kind of editing is no accident, and it gets worse as the nearly two-hour documentary progresses. We’re frequently treated to far-left citizens yelling at Gaetz and co., their views amplified with little context or clarification.

One long, instructive sequence finds the three “Swamp” stars fielding calls from their constituents. The callers are all left-leaning souls spouting Democrat talking points on guns and the impeachment crisis.

“I’ve had enough,” Buck says after the montage. Cut to another Buck moment where he admits to being drained by his job.

The first clear sign of bias emerges when Lessig blames much of today’s woes on former Speaker of the House Newt Gingrich. Later, Lessig pins our hyper-partisan age on … President Ronald Reagan.

The filmmakers lean oh, so heavily on Lessig, an avowed liberal, while drifting from the approach teased in the press release – a “cinema verité” style feature. When “The Swamp” sticks to that approach, even when it correctly dings the three “stars,” it’s firing on every possible cylinder.

The presentation routinely highlights the hypocrisy of the key players. Gaetz confers with Congressman Ro Khanna (D-CA), eager to reach across the aisle to get things done. The next moment Gaetz delivers a scorched earth screed on Fox News.

His attempt to explain it all away with being politically “fluid” is far too cute.

Holding people accountable is both fair and necessary, especially in a documentary of this kind. Blindly sharing Gaetz’s talking points would serve no one save his staffers.

The film’s framing turns increasingly progressive as we head toward the impeachment crisis. It doesn’t help that “The Swamp” features Gaetz delivering red meat theatrics over substantive arguments, while the liberals on hand are seen as expansive and reasonable.

“The Swamp” is happiest when the Republicans are reaching out to their liberal colleagues against President Trump’s wishes, even if there are no examples of the opposite taking place.

The documentary’s lowest moment comes when we meet Katie Hill, the freshman Congresswoman who resigned in disgrace after sexual images leaked of her with a female staffer.

Hill admitted to the affair (the photos made that impossible to refute – remember that blue dress?) but denied a second report that she had a romantic relationship with a separate staffer.

Katie Hill is resigning to avoid an ethics investigation into an alleged affair with a staffer.

Katie Hill is resigning because she is a predator. https://t.co/uP7aorHaGF

Again, whenever a Republican reaches across the aisle it’s seen as positive here. There’s no footage of Democrat professor Jonathan Turley defending President Trump during the impeachment trial.

The film fawns over Hill as well as John Sarbanes (D-MD), given ample screen time to share his ideological views, sans challenge.

“The Swamp” does few favors for President Trump, showcasing his opponents at every turn and depicting him as a war hawk. The same “war hawk” whose tough rhetoric against Iran actually avoided an armed escalation, or as the film frames it, “The War in Iran.”

World War III got canceled months ago, if anyone remembers.

The project’s progressive bent flares anew whenever guns enter the equation. We’re treated to lengthy shots of Buck expertly shredding targets at a firing range, while we’re told the NRA blocks popular gun reforms that could save lives.

Naturally, the film relies heavily on both CNN and MSNBC for headlines and data points, flirting with Fox News footage for less substantive moments. We’re even treated to a Stephen Colbert rant, another sign of the filmmakers’ broader attentions.

“The Swamp” is never dull despite its nearly two hour running time. The quietest moments speak the loudest, as we’re given valuable peeks behind the Beltway curtain. Who knew congressmen literally have to pay to keep and maintain committee seats?

We see representatives schlepping all over D.C., conferring in tiny, spare rooms for privacy’s sake and even hear Gaetz have one-on-one phone calls with President Trump.

That kind of access is rare and valuable, and we could use a lot more of it than another biased attack on today’s GOP.

Of course, the biggest example of the toxic swamp remains the surreal attempt to take down a duly elected president courtesy of a phony, Trumped up collusion hoax. Conservative media has dutifully documented every wretched step of that operation.

Is anyone surprised an HBO documentary dubbed “The Swamp” ignored that story entirely?