Now, inspired by the Ewan McGregor and Charley Boorman docuseries “Long Way Round” in which those two take a motorcycle trip around the world, Eldredge has written and executive produced his own full-length movie, “A Story Worth Living.”

The film follows Eldredge, best known for the New York Times bestseller “Wild at Heart,” on the motorcycle ride of a lifetime in the Colorado back country.

He’s accompanied by his sons Sam, Blaine and Luke; and two close friends, the author and psychologist Dr. Dan Allender, and Jon Dale — the only group member with any off-road motorcycle experience.

An exhilarating adventure narrative, “A Story Worth Living” captures the highs and lows of dual-sport riding, including a bone-breaking crash on Engineer Pass. The group covered one thousand miles in eight days.

Initially, however, a full-length feature film wasn’t in the cards.

Filming the motorcycle ride was going to be a follow-up to the web series “Killing Lions,” in which Eldredge and his sons ride on mountain bikes in the deserts outside Moab, Utah.

“There was this idea that the narrative of this trip would be secondary and a backdrop for some really great discussions,” said Erik Ticen, director of “A Story Worth Living.” “As we were wrapping up, we said, ‘There was a tremendous story here that needed to be told.’”

This presented a challenge for Ticen. He didn’t originally film with the intention of the footage becoming a feature-length production. As a result, the film had to be essentially re-scripted.

“The story that emerged almost perfectly illustrated everything that the guys wanted to talk about,” said Ticen.

In one scene, the group visits the canyon where Brent Curtis, co-author with Eldredge of the book “The Sacred Romance,” died in a climbing accident. Eldredge’s ministry was just starting to take off when that accident occurred.

“It was a sober moment, as Brent had been kind of a second father to us,” said Sam Eldredge. “I felt some similarities on this trip. We’re kicking off what feels like another intro into a world that we’re trying to reach. There we were, standing there over a decade later looking into the canyon and feeling all these connections – life, death, fear. Without (Brent’s death), I don’t know that my dad’s story would be the same.” 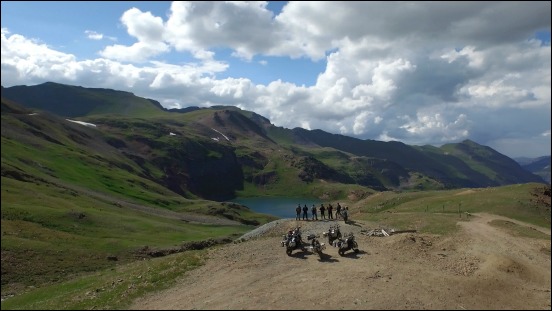 Sam Eldredge, also one of the film’s producers, was the lead rider. As such, he felt responsibility for the men, who range in age from 21 to 63.

Before embarking on the journey with BMW F800GS adventure bikes, the group wisely went to RawHyde Adventures for off-road motorcycle training. That didn’t mean that they were playing it safe … just smart.

“We weren’t going on a trip with professional stunt riders – we were taking my younger brothers, my father and a couple of close friends,” said Sam Eldredge. “If something were to go wrong or if a choice I were to make would prove to be the wrong one, that carried significant consequences.”

Inspiring Others to Live a Better Story

John Eldredge, who also narrates “A Story Worth Living,” says in the film, “Every life is a story.” He wants viewers to follow what makes them come alive.

“Allow yourself to dream. Turn the editor off – that internal voice that always asks, ‘Yeah but how.’ How isn’t helpful. Just let your heart come back up to the surface, give it a voice. Do some dreaming. Try something,” John Eldredge said.

FAST FACT: The team used 17 cameras to capture what’s seen on screen during the trek, including several GoPro cameras attached to both their bikes and helmets.

Now that John Eldredge has his own full-length film, perhaps other authors will refer to “A Story Worth Living” when they mention an epic adventure film.

The nationwide premiere of “A Story Worth Living” is May 19. Visit www.fathomevents.com for more information.

Brant Skogrand writes regularly for the Reflections from the Center and Skogrand PR Solutions blogs. He is the author of three books: “Maynard’s Memories,” “19 Tips for Successful Public Relations,” and “From Fringe Party to Serious Contender.”