” follows a herpetologist trying to turn his assistant into a snake.

And, given the limitations of the era, darn near impossible to visually pull off.

Why “Sssssss” endures, and looks crisp via its Scream Factory Blu-ray release, is the attention paid to the snake kingdom. And let’s not forget the dedicated turn from Strother Martin, cast as the monster who cares more about reptiles than his own flesh and blood.

Dirk Benedict plays David, a cash-strapped student who agrees to help a snake expert with his research. Dr. Stoner (Martin) knows snakes as well as anyone. He also thinks their kind will be the only ones left when humanity collapses due to dwindling natural resources.

He was green long before it became cool. Only he wants to literally turn David green.

So he begins a series of injections meant to bring out David’s inner reptile. Yes, Dr. Stoner isn’t all there, but Martin plays him straight all the same. As mad scientists go, he’s a keeper.

Good thing David is as eager as he is gullible. So he doesn’t rebel when his skin starts peeling from the “inoculations” Dr. Stoner administers to stave off snake venom.

Today’s movies, even the lousiest ones, strive for authenticity. “Sssssss” hit theaters more than 40 years ago, but its dedication to snake lore grounds its genre failings. Martin looks like he’s been handling snakes for decades, even though the Blu-ray features paint a far different story. We learn about the various snake variations and how deadly some can be, all organically wrapped into the story.

Those snake asides aren’t goosed for cheap thrills. Instead, they play out as part of the critical context.

FUN FACT: In “Confessions of a Kamikaze Cowboy: A True Story of Discovery, Acting, Health, Illness, Recovery, and Life

,” Benedict details how he beat cancer thanks, in part, to a macrobiotic diet.

The half David, half Snake concoction remains as creepy as it was in 1973. Kowalski limits our view of David as his transformation sets in. That restraint, and how Benedict alters his voice to reflect his DNA revolt, deliver surprising chills. 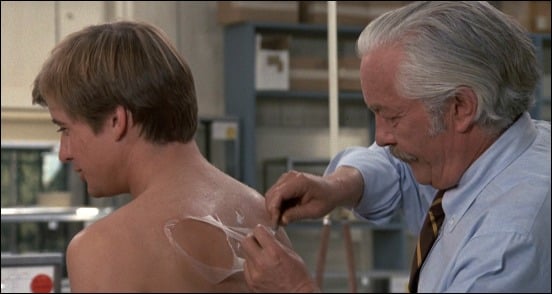 Other FX moments are handled with less subtlety. One sequence hearkens back to the Wolfman transformation in “Abbott & Costello Meet Frankenstein.”

For the most part, the effects do little to douse our sense of unease. The score also delivers on the chills. Then again, what ’70s horror movie didn’t boast a creepy soundtrack?.

The story’s subplots are another matter.

A local brute played by future Captain America Reb Brown reveals the silly side lurking beneath the film. And David’s romance with Dr. Stoner’s daughter (Heather Menzies-Urich) is handled with all the delicacy of an Afterschool Special.

The extras on “Sssssss [Blu-ray]

” include two interviews with stars Benedict and Menzies-Urich. Each share their memories from the production. Clearly, the former “A-Team” star has the looser lips.

He spills a number of rambling, funny stories from the set. One includes how Martin once dropped trou because he was deathly afraid of … snakes. He could have fooled us.

Menzies-Urich, who played Dr. Stoner’s daughter, can’t compete with her co-star’s memories. She does say the cast was like a family. Want proof? Martin came to her wedding.