You can tell a lot about a man when he thinks no one is watching him.

I was there on the set of “The Boondock Saints” years ago, watching Flanery work, casually noticing how disciplined he was in his various efforts. If he ate anything other than tuna fish and salad during that shoot, I didn’t see it. 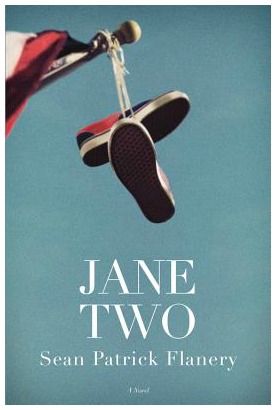 I would watch him go off to the gym while the rest of us went to have a beer after filming was done for the day. During the second “Boondock Saints” film he would repeat the same disciplined behavior, this time venturing out to martial arts studios after we wrapped, to train one-on-one with fellow Jiu Jitsu experts before returning to the hotel to study for the next day’s shoot.

By this time his work ethic and focus had already helped him become a Jiu Jitsu Champion at the 2003 Pan American Games. He carried a quiet confidence, a chip on his shoulder, a secret code he learned somewhere. The line between confidence and arrogance is often a thin one. I wondered where he learned to walk that line, where he picked up his particular man code.

” goes a long way to answer these questions.

The book is more personal, more intimate than I expected, with an honesty and a vulnerability I did not anticipate.

Set in 1970s Texas, “Jane Two” is not a sequel. It’s the name the title character’s parents actually gave her and the focus of the author’s unyielding adoration, respect and love.

The book has time and regional similarities to S.E. Hinton’s “The Outsiders,” with “Jane Two’s” main character Mickey being one of the have-nots, but not quite knowing it because unlike the boys in “The Outsiders,” this young man had constant adult male supervision.

Mostly the wisdom Mickey absorbed was from his Granddaddy, a wizened old Sheriff who lived in a world where chivalry and chauvinism were often cut from the same cloth. As a child, Mickey ate up this man-to-boy advice while deflecting some of the worst female role models his world had to offer: a sister who went out of her way to hurt him – nay – end him, an older, married neighbor who outwardly tried to cougar him into her bed and female classmates concerned only about boys with money.

DID YOU KNOW: Sean Patrick Flanery is a lifelong martial arts devotee. He first picked up Taekwondo at the age of 9 and later studied both Muay Thai and Brazilian Jujitsu.

Midway through the book, young Mickey gets to watch up close and personal as his Granddad catches a thief and uses compassion to rehabilitate the young man on the spot. Granddad issues three life rules for working any future job: Show up early. Stay late. Volunteer for the hard stuff.

In short, always give your employer $2 worth for every $1 paid. In the end, both the author and the humbled thief took those words to heart.

I found “Jane Two: A Novel

” to be three things: A love story, a coming of age tale and, in the final outcome, a tragedy.

Why ‘Jane Two’ Matters to Men

This book should resonate with most readers but especially with men, certainly men of the author’s era, with familiar life lessons of bullies, drugs vs sports, the inability of some girls to show restraint with loud perfume and that glorious memory of “frost whiffing.” It’s that wonderful sound, feeling and rich cold impact on one’s face and lungs when you open a grocery store freezer section on a hot summer day.

But make no mistake, this book is very much a tragedy. While the first half speaks of romance, longing and the beautiful Unicorn just out of reach, the second half will take your breath away as the circle of life closes unexpectedly and abruptly. Where you will cry will be specific to your own life circumstances, but cry you will and. I did.

The final irony, much like a good O. Henry story, will make you wonder how the author ever fully moved on, or if part of his soul still remains in that small Texas town.

Brian Mahoney is a former Cobra pilot for the US Army. He’s a fan-favorite actor from films such as “The Boondock Saints” and “Furious 7.” Follow him on Twitter at @btmahoney