The Mueller Report didn’t do it. Nor did several Women’s Marches, last-gasp celebrity PSAs or near constant comparisons to Hitler.

The films focus on Roy Cohn, the shady lawyer with ties to some of the biggest stories of the 20th century. Think the McCarthy hearings and the death of convicted spies Julius and Ethel Rosenberg for starters.

Cohn had front row seats for both, his actions inextricably tied to each.

Cohn died of AIDS-related illness in 1986, but he’s being cinematically resurrected for a modern connection. Cohn served as Trump’s personal attorney and, some suggest, his mentor.

“Where’s My Roy Cohn?” debuted earlier this year at the Cannes Film Festival and will begin a limited theatrical run Sept. 20. The film earned a rave review from the far-left Hollywood Reporter, with a special emphasis on the Trump-related content.

A significant section of the doc is devoted to Cohn’s vital connection with the Trump family, beginning with Fred, and the eventual close role he played in the career of son Donald, whom he came to see as a protege and, in Tyrnauer’s view, the greatest example of Cohn’s negative influence on the country — even if Cohn didn’t live to witness his crowning achievement.

Even the press notes for the film unabashedly show the mission behind the documentary. 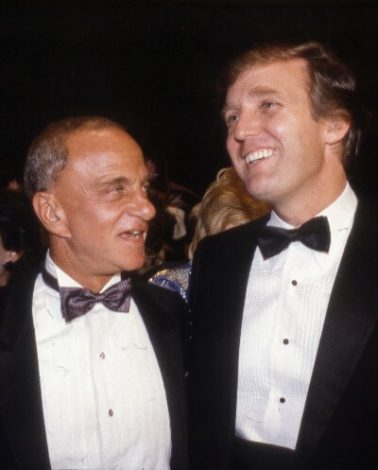 The second Cohn documentary comes courtesy of HBO Documentary films along with a very personal connection to Cohn’s past. “Bully. Coward. Victim. The Story of Roy Cohn” is directed by Ivy Meeropol, the Rosenbergs’ granddaughter.

Meeropol’s film- and Tynauer’s– are going to be a source of displeasure for Trump, who will undoubtedly claim he never knew the despicable fixer. But video and photo evidence will belie those assertions.

Trump wrestles with the truth, no doubt, but how could he deny having Cohn as his lawyer? We’ll have to wait and see.

In case the purpose behind “Bully. Coward. Victim” wasn’t clear, Meeropol chases away any doubts with this statement:

“The time has come for audiences to understand a man who, while hiding so much of himself from the world, has had a profound influence on our society, even to this day.”