“There’s a lot of people who decry Hollywood’s approach to reboots and sequels, but in crowdfunding what makes the most money is reboots and sequels,” says Rooster Teeth co-founder Burnie Burns. Consider the Kickstarter.com records smashed by reboots of “Veronica Mars” and “Mystery Science Theater 3000.”

It’s why Rooster Teeth is so proud of its own record-breaking project.

The Austin-based studio behind “Red vs. Blue” and other online smashses snared $2.4 million via Indiegogo.com to create “Lazer Team.” The group’s new film follows four atypical heroes tasked with saving the earth from an alien race.

“That’s what crowdfunding should be funding, taking risks,” Burns says.

“Lazer Team” opens in select theaters Jan. 29 but will be available on the premium YouTube Red service in early February. It’s fitting for a company that revolutionized the way content reaches consumers.

Why not go the YouTube Red route when Rooster Teeth already has more than 20 million subscribers on YouTube’s free service?

Matt Hullum says the team actually made its first feature-length film during college. Since then, they’ve been too busy to try a follow-up. Fourteen seasons of “Red vs. Blue” takes its toll.

Enter Indiegogo.com. The crowdfunding site set the spark the team needed. It also leveraged its massive fan base.

Crowdfunding “turns it from the thing we do next into what we’re doing right now. That was really inspiring and exciting,” says Hullum, “Lazer Team’s” director.

“We come from that space … we started working with video games [years ago]. We loved them and they were our main form of entertainment,” Burns says.

Too often Hollywood salivates over the money video game manufacturers make. What comes next is typically a diluted version of a video game hit. Think “Doom” or “Max Payne.”

“Our things feel more genuine to a video-game experience,” Burns adds. “Fans sniff out when they’re being pandered to.” 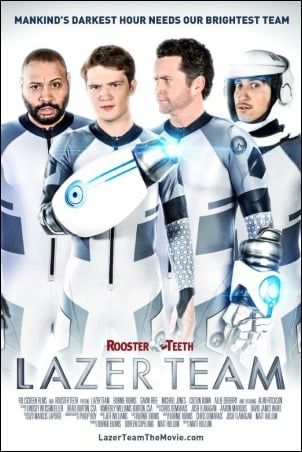 “The appeal of ‘Red vs. Blue’ is the dialogue is organic and the storylines on the show are built from those experiences.” Hullum says.

Founded in 2003, Rooster Teeth’s co-founders came of age during a technological transition. Burns recalls the arduous process behind their first film, “The Schedule.”

“It took 13 months to make it and 12 months to market it to film festivals,” Burns says. “In the middle of all that we stumbled onto viral videos. Why would we do this any other way?”

Our digital age does come with its own obstacles.

“It was our hobby and our passion to able to grow [Rooster Teeth] into a big business. We don’t ever lose sight of that,” Burns says. “We’re not going to retire to do something else. That itself is its own reward.”