He’s bring gravitas to true crime dramas like TV’s “Watching the Detectives,” “The Perfect Murder” and even the iconic series “NYPD Blue.”

Tirelli is still making sure movie cop characters sound and act like the genuine article. Now, a younger audience can watch one of their peers fight crime.

The PG:13 film stars Broadway’s Ripley Sobo (“Matilda”) as a girl who witnesses a kidnapping in her New York City neighborhood. Only the local police officers think she might be telling a tall tale.

To be fair, her story has its fair share of holes.

One seasoned detective (Susan Sarandon) gives her the benefit of the doubt. Together, they just might crack the case, assuming the plucky girl can stay out of the kidnapper’s clutches. 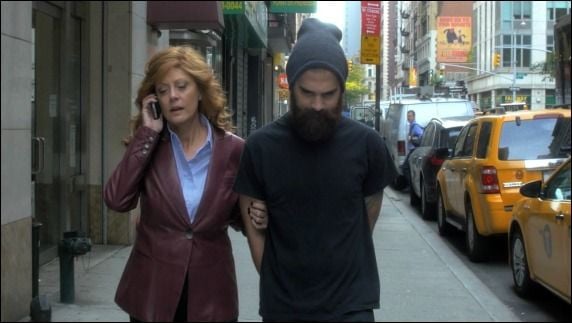 “One of the things we always try to do is show that the cops are out there to do the right thing,” Tirelli says of projects like “Ace.” And that means stories showing how the police and public work in tandem to solve crimes.

“Ace” is the latest collaboration between Tirelli and director Kevin Kaufman, who co-produce the aforementioned “Detectives,” “Murder” and “I Married a Mobster.” The new film came from Kaufman’s own experiences.

No, his daughter didn’t team up with an Oscar-winning actress. But the plot came to Kaufman after he left his own teen children alone and wondered what might happen in his absence.

Tirelli previously worked as a technical advisor and story producer on “NYPD Blue.” With “Ace” and other Kaufman projects, he’s much more hands on. He’s even part of the script-writing process.

“Kevin and I do everything [together] pretty much from the beginning to the end,” he says. “We basically put our minds together … not only for the police stuff but for all of it.”

Of course, the police material comes second nature to him. It’s his task to make sure the cops talk like real cops, and investigate a fictional crime as if it were the real deal.

Not every show or movie gets those details right.

“Every cop will be critical of certain things [in pop culture],” he admits, but adds his admiration for the new HBO series “The Night Of.”

“The authenticity of the police stuff is incredible,” he says.

And then there’s CBS’s “Blue Bloods,” which strays from reality now and then. And that’s being kind.

“Sometimes I cringe in my seat. The whole family runs the whole operation,” he says with a laugh. Yet the stories are good, he adds, and it shows that cop camaraderie that officers enjoy.

The actors are often the first ones to saddle up to Tirelli to get the cop material just right. Take Keanu Reeves, who Tirelli worked with on “Exposed.”

“They wanna speak the way we speak on the job and have that terminology,” says Tirelli, who calls Jon Voight, Edward Norton, Jimmy Smits and Kim Delaney as “the most down to earth people.”

If time permits, Tirelli takes actors to the local police department. They tour the precinct and interact with the men and women in blue.

“The biggest thing is to understand what we go through every day,” he says.

Lately, that means dealing with a cynical press and headlines no cop wants to read. The eruption of Black Lives Matter and some suspicious deaths at the hands of police officers weighs heavily on every good cop’s heart.

What the public doesn’t understand, Tirelli says, is that when an officer heads off to work each day the last thing he or she hopes to do is shoot someone.

“They wanna enforce the law. That’s what we like to do,” he says. “Things are gonna happen out there, and there are three sides to every story.”

“It’s easy to play Monday morning quarterback,” he says of controversial cases that become fodder for our 24/7 news cycle. “We’re so quick to judge what the police are doing instead of getting all the evidence first.”

After all, few know what it’s like to fight crime if you haven’t dedicated your career to it.

“Every car stopped your heart is racing. You don’t know what’s behind those doors,” he says.

Tirelli isn’t a cop any more, but his deep connections to law enforcement remain.

“My brother Danny is still on the job,” he says. And that’s why he fully supports implementing body cameras on today’s officer. He says good cops want a system that shows the public they did the right thing when trouble erupted.

“I think it’s the greatest thing in the world,” he says.