The ’80s boasted some of the better comic actors in modern times, from an in-his-prime Eddie Murphy to rising star Robin Williams.

Films from the era often asked too much of these superstars.

Movies like “Jumping Jack Flash,” “Brewster’s Millions” and “The Golden Child” leaned heavily on their stars because their scripts were negligible.

“Fletch” didn’t require someone like Chevy Chase to ride to the rescue.

The film, based on the character created by Gregory Mcdonald, gave Chase the best vehicle [ever?] for his singular talents. The layered story could stand on its own without his high jinks. The script packed so many great lines that even a third-rate “Saturday Night Live” alum could nail them.

Chase wasn’t a third stringer back in 1985. He stood at the top of his game, a confident cad you couldn’t help love.

DID YOU KNOW: Chevy Chase was born Cornelius Chase, but he got the nickname “Chevy” from his grandmother.

Chase stars as Irwin Fletcher, or Fletch for short. He’s an investigative reporter hunting down the source of drugs flowing through a depressed beach town. He gets propositioned by a dying millionaire (Tim Matheson) who wants Fletch to murder him so his wife can collect on his insurance policy. The shady deal sends Fletch off on a mission to find the truth behind the death wish.

And, of course, the Underhills. 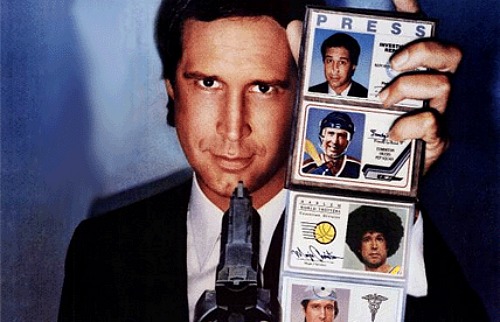 Chase’s career belly flop in the ’90s makes it easy to forget his mad dash through some of the ’80s best comedies. “Fletch” hovers near the top of that heap.

Consider the scene where Fletch, dressed in a surgeon’s scrubs, is dragged into an operation mid-incision. Just watch the actor’s face en route to passing out. The sequence should have been as stale as a pie in the eye. Instead, Chase’s rubbery face dances with inspiration.

That’s but a precursor to his inspired rendition of “Moon River.”

The supporting players often give as good as they get from Chase. The droll Richard Libertini shines whenever he reminds Fletch of those pesky deadlines. There’s palpable chemistry between Chase and Wheeler-Nicholson.

And let’s not forget Geena Davis as “Larry,” whose body Fletch adores.

“Fletch’s” lean story gets flabby toward the end. A car chase starts the trouble, making the movie feel like yet another uninspired set piece from the era. But the final confrontation between Fletch and Baker’s cop brings the film to a crisp resolution.

“Fletch” remains one of the ’80s best comedies, and reason enough to consider Chase as the decade’s official court jester.