He kept a bottle of vodka in his desk drawer and by the time his afternoon classes rolled around he’d be three sheets to the wind.

“Three sheets to the wind” being an old sailing term that aptly described his being slightly tilted to the side and always keeping one hand for the ship.

A drunk was nothing new to me, so I could overlook the erratic behavior. One time in film class he grabbed a student by the shirt and pulled him into the air and yelled in his face. 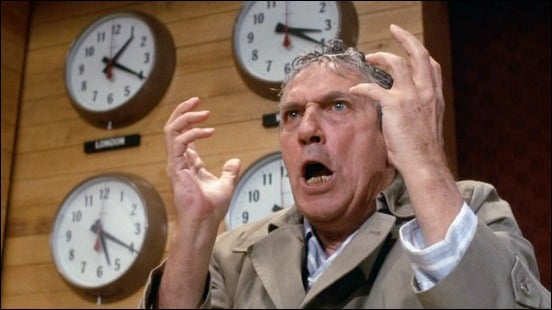 “I’m as mad as hell, and I’m not going to take it anymore!” he cried, spittle flying, when the kid mistakenly asked what the line was when all of us had been told repeatedly to pay attention to it. (My guess… that kid still remembers that line today.)

No way in today’s hypersensitive, politically correct, students-first mentality could a teacher like Mr. Sutton exist. That’s a shame. Whatever his faults, he’d start reading Shakespeare in English class, and it flowed from his tongue as if spoken by the great bard himself.

I had three classes with Mr. Sutton – English, Film Studies, and then Film Studies again as a teaching assistant. I learned a great deal from him. He was the best teacher I had in high school. I still wish he’d written a book about movies, Shakespeare, Chaucer, or whatever. His insights were invaluable.

He once told us, “Hollywood’s best movies are when they peek behind the curtain and look at how the sausage is actually made.”

So, in honor of Mr. Sutton and all the teachers who struggle to bring a bit of wisdom to disenchanted teenagers, here’s a list of the Five Best Hollywood Movies About Hollywood.