The 30- and 40-something men took selfies with life-sized replicas of Boba Fett, Darth Vader and a remote-controlled R2D2. They elbowed each other, giggled a bit and otherwise shed their adult selves for a few, precious minutes.

This year’s Dad 2.0 Summit invited a select group of fathers to visit the Lucasfilm compound in San Francisco. The mission? Get a sneak peek at the latest synergy between the “Star Wars” franchise and Lego toys.

No, “Star Wars Episode VII: The Force Awakens” doesn’t hit theaters until December, but Lego is prepping a series of products tied to the eagerly awaited sequel. 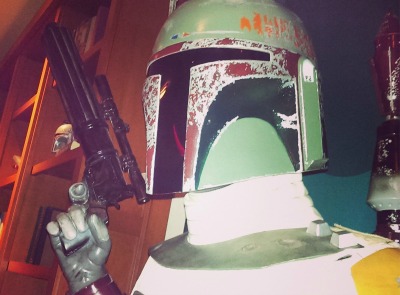 This father was part of that group, and the franchise’s enduring appeal wasn’t lost on me.

A water fountain featuring Yoda greeted visitors, and nearly every inch of the compound reflected Lucas’ movie passion. Film paraphernalia lined the hallways, as did massive movie posters framed majestically along the corridors.

John Wayne, Elvis Presley and even Woody Allen circa “Bananas” hung from the walls, Italian posters of their English-speaking movies. Other cinematic art included matte paintings tied to various Lucasfilm projects, many painted on shower doors. A press representative said the doors could easily be wiped clean and re-used if necessary during a production.

We spent part of the night seated in the official Lucasfilm theater, a cleanly designed movie house with the best sound system this critic has ever heard in such a venue. We watched a series of Lego-related content under strict embargo, but we also were treated to a replay of the first “Force Awakens” trailer.

Yes, everyone likely saw the trailer a time or two on their laptops, but this was different. More oohs, ahhs and cheers. The Force remains strong on Lucas’s brainchild.

The filmmaker no longer controls the “Star Wars” saga following the $4 billion sale to Disney. Director J.J. Abrams is pulling the strings on “The Force Awakens,” but two other directors (Rian Johnson, Gareth Edwards) are also part of the new “Star Wars” creative team.

They all owe Lucas a debt of gratitude for the films they’re working to bring to the public. The dads assembled Friday owe a similar debt to the filmmaker for bringing their childhoods back into focus for one night.

DID YOU KNOW: George Lucas once dreamed of being a race car driver, but a very serious accident derailed those plans. He ended up capturing car culture in the classic film “American Graffiti.”