“Our Dogs Did Not Bark A Politically Incorrect Dystopian Tale

” was written as a cautionary tale.

The premise of the novel is taking Progressives at their word. It is a sobering view into the plausible future of the United States.

What if the Marxist/Socialist/Progressive political and social views proclaimed by elected officials, the 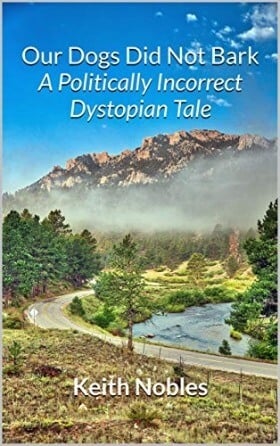 media and everyday citizens were to come to pass?

What if we found ourselves in a world where the people making these Progressive arguments today were empowered to act on what they proclaim to believe and want just a few years into the future?

The precedent events that would be required are quite plausible.

Ripped from the Headlines

Among those precedent events are a pension crisis, credit/debt crisis and losing a war to China. These are all quite plausible events in the 2020s if the United States does not substantially alter the trajectory that we are on.

The drama is in what comes next.

The book is unique in that it presents a dystopian tale that is premised on the logical outcome of the path that the United States is traveling. The novel builds on the assertions and promises you can read in the news today and on the realization of tail risks that the United States has acquired the last several decades.

This is not “Mad Max” or “1984.” “Our Dogs Did Not Bark: A Politically Incorrect Dystopian Tale” is plausible, all too plausible.

The Reviews Are In …

The novel has been called haunting and eye-opening. As the author this pleases me by virtue of my desire to communicate the obvious – that words and actions have consequences. The great cultural complacency of the United States has become a belief that we are not required to suffer consequences.

The belief that we are the United States and consequently immune to any and all adverse effects from bad ideas, failed policies and our tendency to confuse fiction with reality in the political and economic arena is prevalent. One might even say dominant.

“Our Dogs Did Not Bark: A Politically Incorrect Dystopian Tale” portrays the fallout of these bad ideas, failed policies and our tendency to confuse fiction with reality. It is an entertaining political thriller written with the hope that it will spur the reader to rethink the current dynamic and promote significant change in the current trajectory.

.” From 1981 to 1995 – during the height of the Cold War – he was employed as a contractor to the intelligence community. He then accepted leadership positions for software firms during the Dot Com era, followed by a senior management position in aviation. In addition to blogging on his website, KeithNobles.com, and commenting on politics, economics, culture and society you can follow Keith on Twitter @AuthorNobles or on Facebook