The Netflix special finds Bill Murray crooning Christmas classics along with some of his celebrity pals. Chris Rock. George Clooney. Miley Cyrus. Rashida Jones. Paul Shaffer. Its heart is in the right place, and you might get a tingle of Yuletide spirit before the hour-long special ends.

Only the whole premise packs a self-congratulatory vibe that should have expired decades ago.

The special’s first half borders on trainwreck status. It’s a wink-wink parody of a celebrity trying to host a Christmas special, but a Manhattan blizzard keeps getting in the way. Maybe a younger Murray could have pulled the concept off, not the 2015 Murray who’s practically a deity in our culture.

Murray’s pipes and some unimaginative direction make matters worse. The special looks ugly, with awkward lighting and flat compositions. When Rock drops by and is coerced into a duet of “Do You Hear What I Hear?” the results are tepid at best. The comic icons don’t even bother being funny.

Musically, the special offers both coal and good cheer. Murray isn’t a singer by trade, and it shows. And for every time he sells a line with some impish phrasing, there’s another where that mugging fails him. 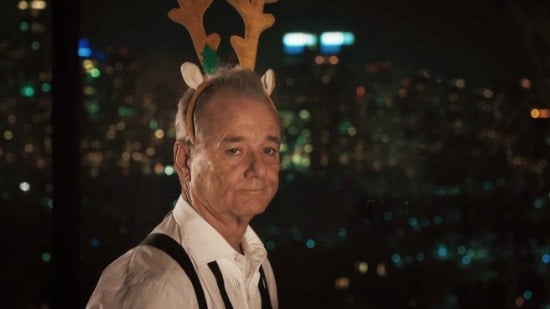 Why build a holiday special around Murray in the first place? The comic actor has earned his rarefied status. His body of work, and limitless range, speak for itself. And he hasn’t spent the last 30 years shoving his politics in our face, or making a spectacle of himself in public. His impromptu wedding toast last year went viral for all the right reasons.

The same can’t be said for some of his co-stars.

It’s hard to watch Clooney and Cyrus and not get distracted by what we know about them away from the spotlight. For Clooney, who pals around with a failed president when he isn’t making movies, that movie-star twinkle doesn’t shine like it should. And try processing Cyrus’s husky but beautiful take on “Silent Night” without recalling the naughty headlines she generates on a weekly basis.

And that’s a problem with the lazily constructed “Murray Christmas.” Celebrities can still say what they want, embrace any cause or candidate they wish. Only the public will view them in a new, sometimes unflattering light as a result. And social media will amplify it all, making it impossible to ignore.

The Netflix special also suffers by comparison to other modern content. Today, broadcast TV, cable and streaming giants are in a cage match trying to make us surf to, or DVR, their shows. That competition forces everyone to work harder, try harder, to entertain us. We have too many distractions for content providers to behave any differently.

It’s the opposite of “A Very Murray Christmas,” which floats by on good intentions and celebrity buzz. It’s the kind of special that might have co-starred Dean Martin, Sammy Davis, Jr. or even the Chairman of the Board, Frank Sinatra, many moons ago.

That era is long gone, making “A Very Murray Christmas” a brightly colored package that should have been unwrapped some time ago.