'Annihilation' might end up being the year's best science fiction mind trip, while 'Game Night' delivers one laugh after the next.

One of two problems sink your average science fiction film.

The big reveal is a big ol’ bust, or genre formula kicks in and won’t let go. Neither happens with the mesmerizing “Annihilation.”

Writer/director Alex Garland (“Ex Machina”) transcends our expectations like someone who’s seen every science fiction film ever made and demanded something different. Fresh. Invigorating. New.

That’s what we get – two stunning hours that leave us both satisfied and hungry for more.

Natalie Portman stars as Lena, a biologist mourning the disappearance of her military beau (Oscar Isaac). His sudden reappearance delights her, but the joy is short-lived. He begins coughing up blood and ends up in an ambulance.

She’s joined by four female recruits, each with different skill sets and reasons for attempting what likely will be a suicide mission.

FAST FACT: Alex Garland based “Annihilation” on a 2014 novel by Jeff VanderMeer. The story is part of series dubbed the Southern Reach trilogy.

What happens next is a series of jolts, reveals and action that come at us in wholly unexpected ways. The Shimmer distorts more than time and memory, a lesson the women learn as they head toward what they think is the field’s center.

Garland develops a naturalist tone that embraces science while gently tugging at its boundaries. The special effects are subtle at first, landscape tweaks that could be nothing … or everything. Clues begin to pile up, and the brainiest of the bunch (Tessa Thompson) theorizes what the source behind the Shimmer’s impact.

“Annihilation” delivers some first-rate chills but is in no hurry to let them loose. The screenplay touches on the human condition, our fallible nature and the motivations that influence our lives.

Sound heavy handed? It might be in less capable hands. Here, the discussions flow from the situations the women find themselves in.

Garland develops a naturalist tone that embraces science while gently tugging at its boundaries.

“Annihilation” doesn’t deliver characters with the weight of, say, “Alien.” It’s still a pleasure to watch the women process this strange new realm.

Garland’s “Ex Machina” proved a minor revelation. His latest reveals an auteur who not only adores science fiction but is capable of bringing out its very best on screen.

The “Hogan Family” alum set his bemused persona in stone during his “Arrested Development” days. He’s been riffing on it ever since, finding new wrinkles with every project. You can even see it peeking out from the doom and gloom that is Netflix’s outstanding “Ozark.”

“Game Night” puts the Jason Bateman template to fine use. Bateman plays a happily married man who lives for Pictionary smackdowns. He’s in his comedic element, again, and he’s confident enough to let his co-stars steal every other scene.

One does it by simply stroking a small pet, Blofeld style.

Bateman and Rachel McAdams play Max and Annie, a childless couple who build their social calendars around their game night festivities. Max’s brother Brooks pays them a visit, vowing the greatest game night of them all.

That’s what Brooks does, roll into town with the promise of unchecked wealth and gaiety. And Max hates him for it. You can’t blame him.

Brooks’ latest trick backfires in a big way. What begins as a murder mystery game gets real fast. Brooks is hauled off by a pair of thugs, leaving Max, Annie and their friends thinking it’s all an elaborate act.

Can the couples rally their resources to rescue Brooks? Will Max and Annie come to grips with their ambivalence about starting a family? Just who is the celebrity Michelle (Kylie Bunbury) bedded while on a break from her beau (Lamorne Morris)? And can the friends save the day while dodging the annoying neighbor from hell?

He’s the creepy neighbor who can’t let go of his ex’s memory, or the fuzzy white dog that’s his constant companion. Plemons’ blank look is funnier by itself than last year’s sorry comedy lineup. Yes, we’re looking at you, “Fist Fight,” “Baywatch” and “Rough Night.”

Sure, “Game Night” is a smart, sophisticated riff on relationships. You still keep waiting for the inevitable. The jokes will dry up. The story line will get so convoluted you’ll mentally check out. The characters will change course dramatically, leaving us without a connection.

What’s left is still engaging, even intoxicating at times. McAdams is a hoot, alternately a worrying wife and a neophyte sleuth. Billy Magnussen injects a freshness into the guy who dates vapid model types that you won’t see coming.

Even the running gags boast a high batting average. One starts in a clumsy fashion but rallies strong in the delirious final moments. We won’t spoil it here, of course. It doesn’t matter if we did. “Game Night” has a dozen more waiting in the wings, one funnier than the next. 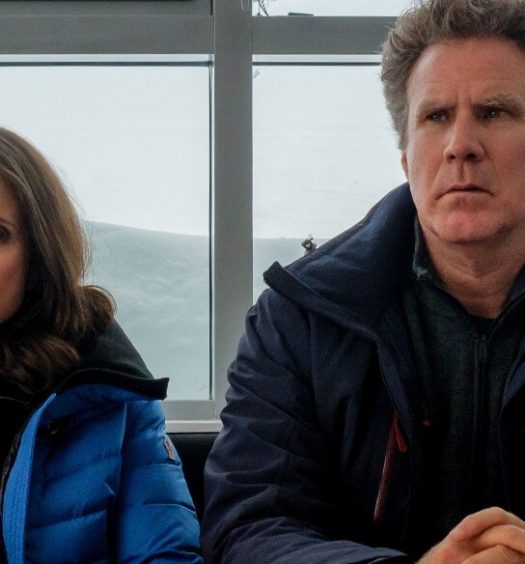 Read More
How ‘Downhill’ Leaves Will Ferrell Out in the Cold

Read More
Why the Uber-Woke ‘Booksmart’ Will Shock You