From the unrefined imagination of a toddler, and the unchecked bank account of a studio in upheaval, the family adventure “Monster Trucks” coasts into theaters.

If you’re wondering how this even arrives into the wasteland of Hollywood’s January dumping ground the backstory may help. This oft-delayed title has taken years, and $125 million, to get here. Last September Paramount’s parent company Viacom absorbed a loss of over $100 million against this title, a full four months before it was released.

That is how confident they were this would be a bust.

Part of the problem? The company was tossing that monstrous budget at a story idea that came not from the then chairman of the studio, but his 4 year old son.

Go ahead; reread that sentence if you need to. It will not any more sense.

But is this a classic calamity for people to point to for years to come? Not really. Instead, you’re left with a unique storyline that could have appealed to kids, but ultimately is a remarkable amount of cash thrown at an unremarkable story. It is a high-concept idea that ends up resembling something washed up at low tide.

The story centers on a high-schooler named Tripp (Lucas Till) who dreams of getting out of his small town in North Dakota’s oil boom region. He spends time working in a junkyard and looking to rebuild an ancient pickup truck for himself to get out of town someday.

Meanwhile a drilling company called Terravex, run by a nefarious Rob Lowe and his scientist sidekick Thomas Lennon, are on the verge of tapping a massive oil reserve. They encounter an underground river system but decide to bore through to hit the payload. This inadvertently releases three large creatures onto the drilling site. 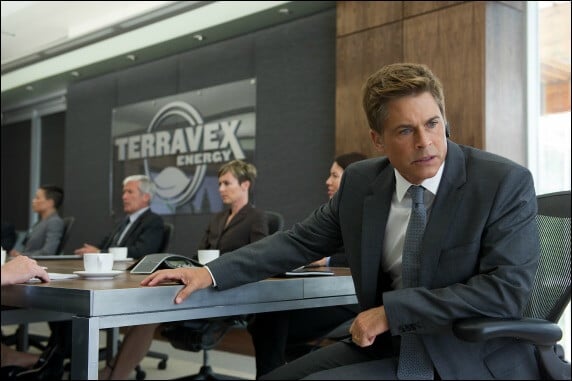 To avoid environmental shut downs the company captures two of the unknown species, but a third stows away in a damaged truck that gets towed to Tripp’s junkyard. After lengthy establishing scenes Tripp finds the odd creature is affable and drinks oil. A partnership is forged, between the outcast Tripp, and the in-cast “Creech.”

There are scars all over this affair indicating studio issues. Characters are positioned and dispatched as mere plot points. Tripp’s mother is shown in early scenes and then disappears. His absentee father is discovered working the oil fields in the second act, but a visit leads to nothing plot-wise before he, too, fades away.

Only Tripp’s step-father Sheriff (Barry Pepper) has an arc, and it is one of convenience, moving from an antagonist to an ally at the end as needed. A clingy school friend has nothing to add, apart from his father being a car dealer whose mechanic shop serves as the reason for a climax. Danny Glover co-stars as the junkyard owner who pops in whenever the story requires truck advancements.

Even the main creature has shifting physiology as required. Initially an amorphous blob, he then becomes physically adroit. Also this species living miles beneath the surface can use mechanics tools instinctively and quickly pilots a truck through city streets.

I am not breaking ground to suggest this wild concept is a disheveled confusion. However Paramount has a hedge to their bet; since it was created by a toddler it is thus aimed at that segment. I’m forced to judge accordingly. But I have a hard time seeing this being an affectionate title for the tykes.

Too much time is spent positioning the drilling company as the evil corporate entity. Just tell the kids it’s bad; no need for scenes about the intricacies of ducking environmental site survey assessments.

Sure there may be some enjoyment at the wild antics with the trucks, and some possible affection for Creech.

However I see no lasting draw for this feature, once positioned to be a new studio franchise. It could be a diversion for the kids at best. Repeat viewings? Unlikely.

Till does game work performing opposite nothing. The performers are fine, given how little they had in the script. Ultimately a better storyline could have been more engaging, and made for a fraction of the budget. Instead you are left wondering how much better things could have been – and just how it was the studio sunk a fortune into such an unfocused mess.

Brad Slager is a contributor to Hollywood in Toto. He also has written for Movieline, Big Hollywood and The Federalist. Please follow him on Twitter @MartiniShark