“I didn’t appreciate how rare that is until someone said, ‘you know, it’s not normally like this. It’s different in Hollywood,’” Beam recalls.

“Miracles” is based on Beam’s 2015 memoir “Miracles from Heaven: A Little Girl and Her Amazing Story of Healing

.” The book recalls her daughter’s life-threatening medical condition and the remarkable events that followed. Jennifer Garner plays Beam, a Texas mother of three scrambling to find a cure for Annabel (Kylie Rogers).

Garner spoke up recently about her industry’s palpable unease with people of faith. Beam’s experiences talking to the “Miracles” cast reflect that reality. She simply found her Hollywood story had a different ending than most film productions.

“I’m so thankful I don’t have that experience,” Beam says.

The married mother of three admits she was a “hot mess” when filmmakers approached her about making her book into a feature film.

A talk with DeVon Franklin, the preacher turned movie executive who also produced “Heaven Is for Real,” helped ease her mind.

“His heart mirrors my heart,” she says. It still took a while to process the liberties most films take with existing properties.

“I wasn’t so sure about things being so different, but it’s not a documentary,” she says. “I went through so many emotions learning how [the process] works, getting something translated from book to movie.”

Meeting Garner in person made a difference.

“We bonded over the movie, but as mothers, too,” she recalls. “OK, I’m gonna let a breath out, and trust that it will be good.”

Beam, an Abilene, Texas native, wrote “Miracles from Heaven” to document a genuine medical anomaly. Her daughter Annabel suffered from a rare condition in which her body could not process food. How she recovered from an illness with no known cure is at the heart of the saga. But so, too, is a parent’s love and how faith can help those in the very worst of times. 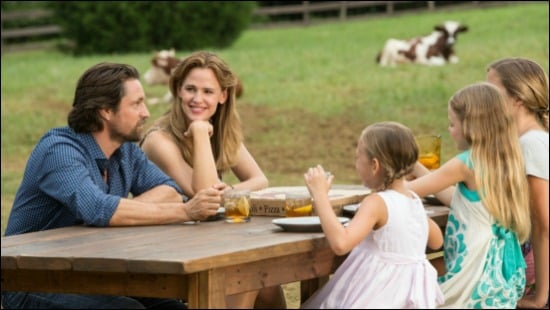 Like “Heaven Is for Real,” “Miracles” unabashedly showcases the power of prayer. That could be catnip for faith-based audiences. Beam hopes the movie doesn’t simply draw believers into theaters.

The movie tries to inspire audiences in their faith in Christ as well as nonbelievers’ ability to maintain hope when all hope appears lost, she says.

The real Annabel has taken her Hollywood close up in stride. She hit the movie premiere’s red carpet in style, her proud mother reports.

“She’s handled it with so much grace,” says Beam of Annabel, adding the instant fame hasn’t gotten to her head.

So is this the end of the Beam-Hollywood connection? The Texas native sure hopes not.

“I’d love to still be involved … to inspire others and give a message of hope,” says Beam, who often discusses her family’s miraculous story with large crowds.

“When I do speaking events … I just see such incredible feedback and how [our story] inspired that many people. That sets me on a mission. I wanna do more,” she says.

Films can leave an indelible impression on viewers. The same can be said for time spent on a movie set. That’s what Beam felt during the production of “Miracles from Heaven.”

Garner says she’s experienced a renewal of her own faith following after playing Beam on the big screen.

“Everyone on that sets … eyes were just opened to God’s faithfulness and the things that truly matter in life,” Beam says.