Let’s be clear – “loosely based” is more accurate. No matter, since there’s very little about the movie that rings true.

What’s worse? Would you really wanna spend time with this sour foursome, even if they’re played by four engaging stars? At one point, a minor character berates the quartet as self-centered to the core.

At that moment the screenwriters should have done some soul searching. If it happened, the feeling passed.

Yes, someone who looks like Zac Efron is stuck for a date. Moving on … 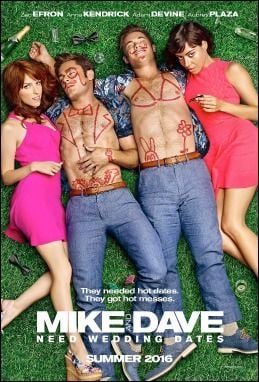 So the brothers set up a Craiglist ad seeking two women to accompany them to the big wedding. The catch? They’ve got to be classier than you average hookup target.

That catches the attention of Alice and Tatiana (Anna Kendrick and Aubrey Plaza), two lousy waitresses desperate to “out-bro” the boys from the opening bell.

They curse. They drink. They curse some more. And they’re very, very proud of themselves every step of the way without an ounce of self reflection.

Hint: Screeching to anyone who can hear that “Ri Ri is my jam” doesn’t count as a life achievement.

They pretend to be all classy and take the boys up on their offer. Wacky antics ensue. Only those antics are forced, or tired or simply exhausting.

The premise doesn’t make a lick of sense. It didn’t in the film’s trailer. And we can’t process it in action. How hard is it to find two milquetoast dates eager for a free trip to Hawaii?

The best R-rated movies mixed the sweet and sour with engaging results. Think “American Pie” or any Judd Apatow comedy.

Those movies are grounded in universal truths between the bong hits. “Mike and Dave” tries to do without, and the results speak for themselves.

There are moments, fleeting moments, when the characters realize how infantile they are. You’d think the script could grow from there, to find something redeemable and funny from that “a-ha” moment.

Instead, we’re steered toward a forced conclusion and the reality that “Mike and Dave” isn’t ready to join the ranks of the Apatow elite.

The characters never really come to life, staggering from one scene to the next in unconvincing fashion. Efron’s Dave is the wild child until he falls back into his sensitive default mode.

Devine, a genuine live wire, is asked to keep pushing his character until you can feel the strain from your seats.

Plaza brings an offbeat energy to every role, so she’s in her comfort zone here. That doesn’t bring much focus to her role.

The film trots out some appealing themes about pursuing one’s dreams and the shadow that insecurity casts upon us. It’s simply grafted onto the gag-a-rama that rarely delivers.

“Mike and Dave” should have studied with Professor Stifler, the lightning rod at the heart of “American Pie” University. He was just as rude and crude as the Stangles, but he revealed flashes of his true self in between crisp one-liners.

This comedy can’t come close to either side of Stifler’s comedic soul.