Step aside, Dave Chappelle. Another comedian just let loose with jokes sure to be deemed “transphobic.”

Except Louis C.K. is already exiled from the Hollywood community, thank you. He can’t be re-canceled.

C.K.’s new hour-long special, “Sorry,” can be purchased via the comic’s web site. No Hulu, Netflix or Amazon Prime.

And while the bulk of the show could easily be shown on those now-traditional platforms, the final five minutes would cause their respective programmers to think long and hard whether to air it or not.

C.K. saved them the choice.

He’s been working independently ever since he admitted in 2017 to pleasuring himself in front of several women. The confession cost him dearly. He lost his Emmy award-winning FX show, “Louie,” a role in the “Secret Life of Pets” sequel and his good standing in an industry which once dubbed him a genius.

He stepped back from the comedy stage and, slowly, started telling jokes again at various clubs.

C.K. hits the stage to a raucous reception, including many standing to cheer him on. His outlaw status partially explains the reaction.

“My favorite sex position…” he begins, telling the audience it’s the same ol’ C.K. after all this time.

From there we get a mixed bag of stand-up bits. Some, like his observations about dog communication, could be told by any second-rated comedian. Other moments, like his extended bit on pedophilia, are pure C.K.

He even jokingly (or not) wonders if we should create child-like sex dolls so pedophiles can abuse them, not innocent kids. It sounds gross on the surface, no doubt, but he’s challenging us to consider ways to face intractable problems.

Comedians do that sometimes.

It’s not hard to see some material hinting at both his canceled status as well as how we’ve treated COVID-19 over the past year-plus. He delved directed into the pandemic mid-special, and while the results are often funny it’s hardly as cutting edge as, say, something Adam Carolla might share.

He did slip in one killer crack about lockdown living.

“How are you all enjoying living the way I was for a couple of years? Welcome to my life … can’t work, can’t go outside … can’t show your face,” he cracks.

From there he joked about a person’s anus resembling the camera aperture seen at the start of 007 movies and the folly of counting the pandemic dead.

“This is like 9/11 every day,” he says in his best Karen voice of those making ghoulish pandemic analogies. When some in the crowd wince at the reference, he quickly assures them.

“It’s all right to make fun of 9/11. It was a hoax,” he says before slowly motioning to the name of the special written in massive letters behind him. 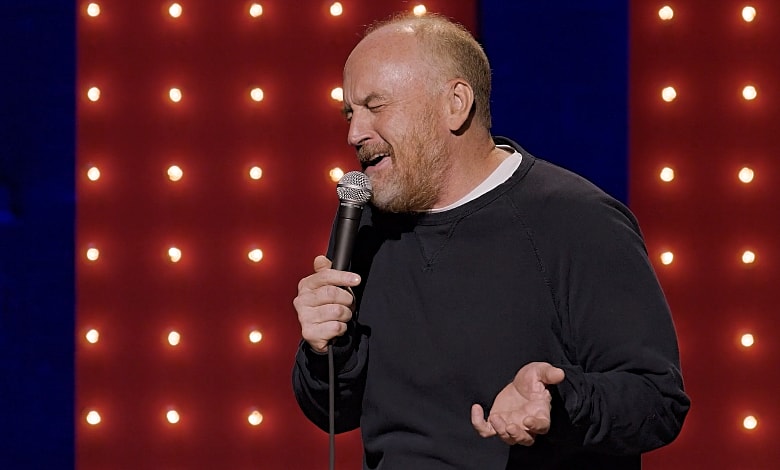 The uneven act uncorks a few lines that only someone like C.K. would attempt.

“This ‘Defund the Police’ idea … what about the people who wanna commit Suicide By Cop?” he asks.

C.K. isn’t an overly political comic, and that proves true here, too. He touches on some Culture War issues but rarely lingers long on any of them. He repeatedly mocks the progressive elites, though, like Hollywood hipsters who adopt Chinese babies only to let their Jamaican nannies raise them.

He also “goes there” a few times, mimicking a Puerto Rican and “black” accent while acknowledging how some might be triggered by it. He’s a progressive to the core, but he understands that being a comedian means making some audience members uncomfortable.

C.K.’s first trans gag arrives after he bemoans the bigotry obese Americans endure, citing a 600 lb. woman who had to go to the zoo to get an MRI test. And yet a far smaller group of people, the trans community, find their bathroom demands met across the nation.

The veteran comic saves his most incendiary material to the end.

RELATED: What Is Cancel Culture, and Why Should Artists Fear It

He digs into cultural stereotypes regarding gay men, often leaning on a progressive frame for the material. He says the modern gay man is strong and successful, betraying the stereotypes of yore.

By comparison, “these modern heterosexual men are [f-words],” he says. “I’m saying that with love, from an old man on his way out, but they’re f**s …when I see a progressive young couple I always wanna stop her and says, ‘does that turn you on?’”

“It’s another kind of dude, a f***y straight dude,” he says of the modern, vape-smoking progressive male.

C.K. wraps by channeling Chappelle, who said in his Netflix special “The Closer” that everyone in the audience entered the world via a woman’s legs. C.K. doubled down on that biological sentiment, suggesting every gay or trans person today required two “boring straight people” having sex to make them a reality.

“With an original [penis], not a turned inside out [vagina],” he says.

Like Chappelle, C.K. couches his trans comments carefully and with extra attention paid to kindness. That didn’t spare Chappelle from the woke mob’s wrath, and that of the mainstream media.

What happens to a comedian who already faced all of the above and lived to joke another day?