“Dude, Where’s My Car” may have been shamelessly dumb, but it had consistently successful, even witty, gags.

The same can’t be said for the equally juvenile “Lazer Team.”

Four knuckle heads (played by Burnie Burns, Gavin Free, Michael Jones and Colton Dunn) stumble upon a downed UFO and immediately adorn the extraterrestrial weaponry aboard. They discover that the alien technology were intended to be worn by one man.

However, with the four of them needing to work together to make all the pieces fit, they become … the Lazer Team.

When an evil alien race threatens to take over Earth, the team learns to work together and use their powers in sync. What goes down isn’t entirely unlike the dummies vs. the aliens cult classic “Dude.” It’s just a cheaper model.

The film’s ample CGI effects are fun; while not awards caliber, the special effects offer more polish than your average Syfy movie. However, the movie itself feel cut-rate. Much of this is too obvious and old hat. In terms of sending up sci-fi conventions. Any five minutes of “Galaxy Quest” has “Lazer Team” beat.

The performances are so overdone, it feels less like satire and more like sarcasm. Everyone is pushing too hard. The acting is strictly at the level of a broad comedy sketch. None of the characters come across as anything beyond goofball caricatures. Astrophysicist Neil Degrasse Tyson makes a cameo appearance as himself, though even this isn’t as funny as it sounds.

Some of the better jokes involves how a character suddenly becoming intelligent means he now sports a British accent. Later, the game of Pong is visually referenced during the admittedly spiffy finale. Some of this aims to tap into the sublime video game imagery of “TRON: Legacy” and “Scott Pilgrim Vs. The World,” but falls short. 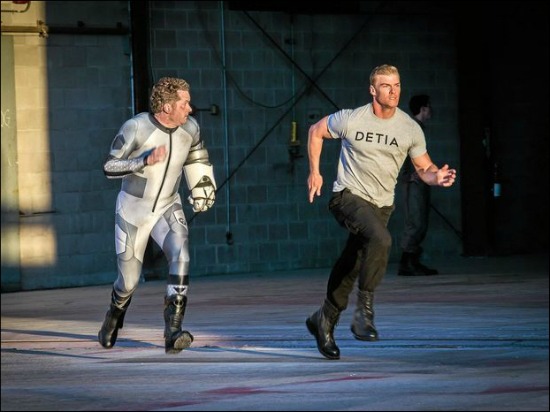 There are some good moments, but they’re surrounded by many more that fall flat. If it picks up a cult following, I hope the subsequent effort from Rooster Teeth has a riper premise and a greater number of actual laughs.

However, this feels too much like a tailor made cult movie, which isn’t how these sort of things work. Whereas comedy classics like “Office Space” and “The Princess Bride” found their adoring audiences long after their brief runs in theaters, this one works overtime to tap into the video game/superhero/online community/dopey teen comedy demographic.

Like other “instant cult classics” like “Repo! The Genetic Opera” and “Shock Treatment,” “Lazer Team” is made with affection for its fans. It’s best at offering self-referential bits, not sustained inspiration.

This debut film from Rooster Teeth, the creators of the “Red Vs. Blue” web series, is only marginally better than the average Broken Lizards movie (well, except “Beer Fest.” That movie rules).

The film’s budget was raised by Indiegogo and, for his first movie, director Matt Hullum has made an energetic and competent comedy. It’s fairly polished and always upbeat, knowingly courting a fanboy audience.

Everyone involved should be proud o their efforts…and try much harder next time.