He’s a senior political correspondent for the conservative site, overseeing its Campaign Spot blog and “Morning Jolt” newsletter. He’s also the co-host of “The Jim and Mickey Show,” a frisky pop culture podcast. 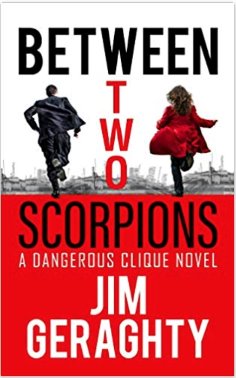 In between, he finds time to write books like “Voting to Kill: How 9/11 Launched the Era of Republican Leadership” and “The Weed Agency: A Comic Tale of Federal Bureaucracy Without Limits.”

His latest, “Between Two Scorpions,” follows a team of dedicated heroes tracking down a unique threat to our nation.

These are not garden variety terrorists.

HiT reached out to Geraghty to learn the inspiration behind the tale’s toe-curling killers and how an Indiana Jones-style moment anchored his fictitious team.

Warning: “Between Two Scorpions” has its fair share of snakes…

HiT: Did a certain news story or historical moment inspire the threat at the core of your story? Or was something else the spark that lit the creative fuse?

Jim Geraghty: I’d had the ideas for these characters for a long time, but I needed the right villain to throw them up against, and the stakes had to be big enough to make you, the reader, feel like you had something at stake in this scenario, bigger than “find the secret plans” or “get the defector out of the country.” The threat of terrorism means that out of nowhere, some stranger can suddenly try to kill you and a lot of people around you – and you never really know when you’re safe.

The terror group Atarsa came out of, “what if a terrorist group really understood Americans and their culture and knew how to press our buttons?” Al-Qaeda and ISIS, as terrible as they are, don’t really understand us.

Atarsa figures out how to find and recruit angry, violent, troubled people, which kind of targets would make Americans feel like, “that could have been me and my family,” how to make law enforcement and the U.S. government look powerless, and perhaps most unnervingly, what it would take to get ordinary citizens lashing out in anger at other Americans. Once I laid out the plan, a lot of people said the plausibility of it all freaked them out.

HiT: Your main heroine, Katrina, is the Jack Ryan-esque hero, while her beau, Alec, stumbles along behind her. What inspired that kind of genre-flipping approach?

Geraghty: I’m sure part of it reflects my wife’s competence and my lack of competence in many areas. But I liked the idea of a yin-and-yang couple at the heart of the book, where one is very skilled but hesitant or wrestling with the moral consequences of her actions, and the other is eager and has no hesitations but often bites off more than he can chew.

I actually started with Alec as the protagonist, and eventually figured the badass dry-witted internally-conflicted Bukharan Jewish immigrant is more compelling front and center, and Alec works better as the deadpan snarker.

Someone observed about my previous novel, the comic satire “The Weed Agency,” that the women characters had complicated inner lives, with the actual dramatic consequences, while the men were usually funnier comic archetypes.

That’s probably about as feminist as I get.

HiT: The book features an in-depth look at different cultures, the intricacies of the spy game and other material most folks just aren’t aware of. Describe the kinds of research you undertook to make sure the thriller hit as many realistic notes as possible.

Geraghty: Writing a novel is a wonderful way to justify buying a ton of books – particularly for topics I’m interested in but don’t really come up in political journalism. Just looking at one of the bookshelves in my home office, over the past few years I’ve bought books on symbolism, mythology, Aztec and Mayan civilization, how to read body language, “Hard Measures,” which is Jose Rodriguez’s autobiography, Lawrence Wright’s “The Looming Tower,” “Spycraft: The Secret History of the CIA’s Spytechs,” “Ashley’s War” (which is about women soldiers working alongside special ops units in Afghanistan), Steve Coll’s “Directorate S,” which is about the CIA’s work in Afghanistan and Pakistan since 9/11, “Rise and Kill First,” which is about Israel’s secret assassinations… my desk is a mess, with several piles of books at any given time.

For future books in this series, I’ve bought books on the Oklahoma City bombing, Jim Jones and Jonestown, Bryan Burrough’s “Days of Rage,” George Packer’s “Our Man,” which is a biography of Richard Holbrooke…

I think today’s Jolt is the Jolt @JimGeraghty was born to write because he gets to speculate on which TV characters would go full MAGA. https://t.co/oMSJSunC5v

Research is often the most fun part. Very often I’ll find myself thinking, “I wonder if something like this ever happened” and am pleasantly surprised to find something like what I was imagining did happen, and that it can fit well into the story.

HiT: A key theme of the story involves paranoia, the fear that we could turn on each other. Did the rise of social media, and its ability to make us feel more tribal, play into that spirit?

Geraghty: Yup. In the – sigh – 18 years of the War on Terror, I’ve gone back and forth on where the line is between covering a terrorist group and when the media can inadvertently amplify its propaganda. This turned into a split between the characters:

In years past, Alec and Raquel had argued about how the media should do its job in a world with terrorism. Alec argued the media had a responsibility to show precisely how brutal and evil terrorists could be; a refusal to show terror acts amounted to whitewashing and hiding the truth. Raquel feared that the media showcase rewarded terrorists, turned the news into one of their propaganda videos, and inspired copycats and wannabes.

I started parts of this book around 2015 only finished the final draft earlier this year. Our hyper-ADD news cycle makes it easy to forget how often the day’s news can make us feel like “what the hell is happening? I don’t recognize this country anymore!”

I went back and looked – during that stretch, we had the riots in Baltimore in May 2015, the Charleston church massacre in June, the Chattanooga recruiting center attack in July, the Paris attacks in November 2015, Planned Parenthood shooting the same month, the San Bernardino terrorist attack in December 2015, the Pulse nightclub shooting in June 2016, the sniper attacks on cops in Dallas in July 2016, the stabbings in the mall in Minnesota and bombs around New York City… and this is all separate from the divisions around President Trump!

After 9/11, Americans had this unifying, “hey, if you try to hurt any of us, you’re picking a fight with all of us” attitude. That’s gone, at least for now, and I think the country is in serious trouble if we can’t find it again.

HiT: You cover politics and culture professionally, so writing a thriller is radically different from your day job. Is that part of the appeal, to forge an escape from the never-ending news cycle?

Geraghty: Absolutely. I joked with my wife that after writing about politics all day, I need to relax by reading about beheadings and assassinations.

HiT: Readers love spy thrillers, but are there any tropes of the genre that frustrate you? If so, does “Between Two Scorpions” directly or indirectly address that?

Geraghty: Sure. I like thrillers a lot, but that doesn’t mean there aren’t a lot of cookie-cutter ones out there. ‘Ali al-Oxenfree the next bin Laden, and he’s about to strike…” There are a lot of tropes that are pretty worn out if you don’t do something to make them distinct: the drug cartel kingpin, the Russian mobster,

I tried to run away from anything too well-worn in this one and will try to do the same in future books. We start in Berlin, in a revised opening that came to me after watching Atomic Blonde, but we move on from any Cold War spy clichés fast and I loved the idea of “the Stasi café” (which is a real restaurant). The aim was to set the stage quick: here’s the bad guy, here’s what he’s trying to do, here’s why he’s dangerous and you have to take him seriously.

The whole Snake Island sequence is very Indiana Jones-y, and the team’s early problems aim to establish that my characters will almost never be “just lucky.” I’ve got a pair of cartel gangs in there, but one is all-women and they wear Day of the Dead-style skull masks. And if anybody’s ever had a spy thriller with a lot of scenes in Turkmenistan before, I missed it.

When I started, I knew I wanted a weird, Twin Peaks-ish atmosphere of mystery but with nothing explicitly supernatural. I looked for really weird, surreal, dreamlike places – Snake Island, the Island of the Dolls in Mexico City, the forever-burning Gates of Hell in Turkmenistan, the abandoned resort and airport in Cyprus.

After a while it was clear this was turning into an absolute genre mash – concepts out of 24 and Mission: Impossible, team dynamics out of Firefly, quips out of the rest of Joss Whedon’s offerings, villains out of a horror movie, mood out of the old Twin Peaks… I realized there was a chance people would absolutely hate this. Thankfully, the souffle didn’t flop.

HiT: Your book openly teases a run of “Dangerous Clique” novels… what can you tell us about the group’s future adventures?

Geraghty: I’ll give you a scoop, in the sense of what I’ve got in mind right now, with the caveat that it could change.

Book Two will involve a kidnapping, quite a bit about Russia, and a document that details a secret history of the Cold War. One of the themes will be what you do when your mentors aren’t there anymore – when you realize that the torch has been passed on to you completely, and that you’re the one responsible from here on out.

What I’m calling Book Two-and-a-Half will be that secret document, full of actual real-life declassified but not-really-publicly-discussed revelations and actions, along with some background and backstory – a sense of how the world of my characters might be a little different from the real world.

Book Three will be the consequences of everything that’s come before, and the big showdown with a villain who becomes a lot more dangerous than he initially seemed. It’s my Infinity War, Days of Future Past, Deathly Hallows, Return of the King. It started from the question, “if you wanted to permanently break the United States of America, what would you do?”