Our heroine is brave and blunt, but she’s still a product of her era. That means she can’t fully declare her independence, 21st century style.

You don’t mess with her all the same.

The beleaguered production hiccups behind “Jane Got A Gun [Blu-ray]

” don’t haunt the film. Its complicated narrative is another matter. We’re never fully invested in Jane’s fate, something that binds us to the very best westerns.

Natalie Portman is Jane, a woman who knows the dark side of frontier life. So she isn’t shocked when her husband (Noah Emmerich) returns home riddled with bullets.

Seems the Bishop brothers have targeted him for death, and Jane may be next. So she reluctantly reaches out to an old beau named Dan (Joel Edgerton), an accomplished gunslinger and practicing drunk.

It’s her only chance of surviving an attack from the meanest outlaws in the land. Jane won’t give up on her home and family without a fight … or a warm gun by her side.

FAST FACT: Among the actors who originally signed on for “Jane Got a Gun” but left the project include Michael Fassbender, Bradley Cooper and Jude Law.

The troubled production behind “Jane Got a Gun” isn’t evident in the finished product. The casting is first rate, even if the versatile Emmerich isnt given much to do. And the backdrops are as pretty as any western in recent memory.

“Gun” luxuriates in New Mexico’s natural splendor, pairing its breathtaking beauty with the ugliness in some men’s souls. Director Gavin O’Connor, who took over for Lynne Ramsay, simultaneously honors western tropes and gives them a spit polish. 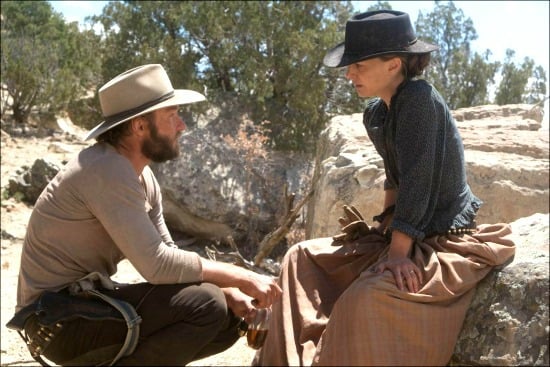 What’s missing isn’t something a directorial switch can overcome. There’s little chemistry between Portman and Edgerton. Their characters have a long and bumpy past, but you wouldn’t know it over the course of the film.

There’s loyalty here, and it’s palpable. But where’s the longing, beyond their synchronized stares? We’re left with two melancholy characters, robbing from the film’s emotional core.

“Jane Got a Gun” reveals their past through a series of slick flashbacks, each helping explain how Jane ended up a target. Ewan McGregor, cast against type as John Bishop, lends the production its most original flourish.

He’s a monster, but you can see him thinking through every evil step.

Portman’s Jane is a survivor, and her willingness to protect the ones she loves powers the film’s first half. Her feminist sensibilities come with a conservative’s gimlet eye for reality. This is war, and she’ll have to wrap her arms around the Second Amendment to survive.

Yes, those guns will soon start firing, and the final confrontation doesn’t disappoint. it also comes packed with a few plot holes, along with an ending that doesn’t mesh with the story’s overall tone.

The western remains a durable genre, even if its box office potential remains limited. “Jane Got A Gun [Blu-ray]

” will scratch that oater itch, no doubt. It won’t make us forget the classics that helped us fall in love with the genre.