J.K. Rowling may be the poster child for our Cancel Culture age.

The “Harry Potter” author earned oodles of praise, and positive press, for her literary canon and progressive politics. She bashed Trump, retconned her own saga to make it more inclusive and enjoyed an exalted place in pop culture.

Then Rowling shared her disagreements with part of the trans movement’s agenda, and the same cultural forces that cheered her every utterance turned on her.

Now, she’s not even welcome at HBO Max’s “Harry Potter” reunion special., and the actors who skyrocketed to fame from the film franchise don’t have her back. Major web sites like Yahoo! suggest the “Harry Potter” books have been permanently stained by her opinions.

And it just got worse.

A trio of trans activists recently shared photographs of Rowling’s home, complete with the address, on social media. The author shares how she was doxxed and what happened next in an 8-part Tweet she pinned on her social media account.

Last Friday, my family’s address was posted on Twitter by three activist actors who took pictures of themselves in front of our house, carefully positioning themselves to ensure that our address was visible. 1/8

Rowling said she isn’t alone in facing targeted harassment for her views. Others who have reached out to her regarding their views on trans issues “have been subject to campaigns of intimidation which range from being hounded on social media, the targeting of their employers, all the way up to doxing and direct threats of violence, including rape,” Rowling says.

The public may not know their names, but Rowling does. And, she adds, they lack the resources to fight back and protect themselves.

“They and their families have been put into a state of fear and distress for no other reason than that they refuse to uncritically accept that the socio-political concept of gender identity should replace that of sex,” Rowling writes.

The author says the trio of activists who doxxed her assumed the tactic would shut up her. They were mistaken.

“They should have reflected on the fact that I’ve now received so many death threats I could paper the house with them, and I haven’t stopped speaking out. Perhaps – and I’m just throwing this out there – the best way to prove your movement isn’t a threat to women, is to stop stalking, harassing and threatening us.” 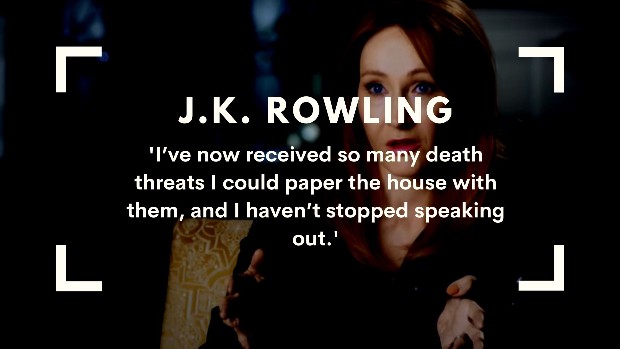 The media often rushes to defend celebrities who endure death threats and/or overly rude posts. When nasty, race-based taunts targeted Leslie Jones of “Ghostbusters” fame the media decried the wave of hate, and rightly so.

Twitter even banned a right wing personality, Milo Yiannopoulos, from the platform because it deemed he helped inspire the rage attacks.

So where’s the press accounts about Rowling’s doxxing and death threats? The Post Millennial shared the initial doxxing details. A good faith search on Google News finds no other major outlets have shared the news yet.

Will reporters cover Rowling’s 8-part Twitter post and the dangers of doxxing? If so, will there be outrage accompanying what she shared, or just a journalistic shrug of the shoulders?

For many, Cancel Culture is an insidious, anti-American movement that demands ideological allegiance. Cross it, and you may lose your career and even your reputation.

Rowling knows all of the above from personal experience. Now, she’s learning about the latest iteration of Cancel Culture.