The studio behind the upcoming “Ghostbusters” reboot released a second look at the comedy today. The new trailer offers a broader peek at the story, the special effects and the updated Slimer. That’s the infamous ghost from the 1984 original, for those not weaned on Bill Murray’s blockbuster romp.

What’s still missing? The laughs. And, more importantly, a reason to get excited above and beyond nostalgia for the source material.

The first trailer got shellacked by consumers, shattering the record for most negative reactions to a YouTube clip. Expect a kinder reaction to Trailer 2.

But not by much.

What’s a movie marketing team to do? Throw down the Gender Card, of course. The latest salvo? Team up with Hillary Clinton. 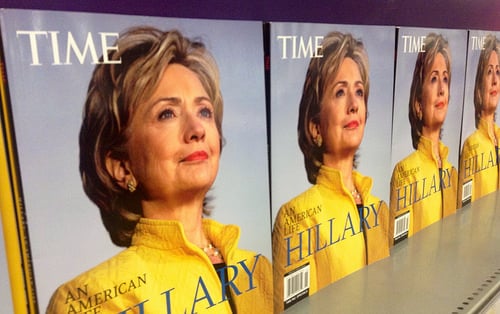 Clinton will appear along with the “Ghostbusters” stars on the May 25 episode of syndicated talker “Ellen.”

The Democratic front runner is no stranger to playing the Gender Card. Her campaign slogan is “I’m With Her,” and her acolytes routinely dismiss criticism of her persona and policies as “sexist.”

For months, those defending “Ghostbusters” did the same thing.

Many declared the hate channeled toward that trailer was unabashed sexism. That’s how The Washington Post summoned up the outrage. Yet even co-star Melissa McCarthy critiqued the sneak peek.

So pairing Clinton with the “Ghostbusters” cast makes sense, if only to double down on the Gender Card. Host Ellen DeGeneres has a history of fawning over Clinton, and by having her share the stage with the film’s cast the message will be clear.

You can even hear that in the new trailer. Leslie Jones, one of the four Ghostbusters, does a stage dive expecting to be caught by a wave of concert goers. Instead, she drops straight to the venue’s floor.

The generic victim card is hardly a recipe for success. Movies like “Ghostbusters” cost a fortune. In this case, that’s roughly $154 million, an early figure that doesn’t include the massive marketing costs.  And getting back in the black isn’t just about those box office receipts. The movie is meant to start a new franchise, sell plenty of merchandise and possibly kick off other “Ghost”-related features.

Playing the Gender Card might mean the movie sells enough tickets to cross the $100 million mark. It also might push away as many viewers as it attracts.

It’s exactly the opposite of the Marvel Model, the gold standard of modern movie marketing.

Marvel movies don’t get political. They avoid ideological agendas. They simply entertain while telling tales tied to our modern era.

That’s how you make movies that bring in $300 million and up, as “Captain America: Civil War” is currently doing.

Director Paul Feig and the “Ghostbusters” team want it both ways. They demand we treat swapping out the all-male original cast with actresses as nothing unusual. And certainly nothing that should be critiqued at face value.

Yet, as the movie’s marketing machines wheezes and coughs closer to the July 15 release date, they weaponize the movie as an attack on sexist Hollywood.

Hollywood IS sexist. The best way to battle that isn’t to play the Gender Card. It’s to make more good movies written by and starring women.