Nor that the last time he rode into the cinematic sunset cell phones were almost as big as our heads.

They just wanted their whip-crackin‘, fedora wearin’ hero back. Steven Spielberg and George Lucas obliged with 2008’s “Indiana Jones and the Kingdom of the Crystal Skull.”

The film delivered for the suits, no doubt. Its $317 million haul proved the hunger for Indy’s exploits was as strong as ever. The sense of dashed expectations lingers till today, even after learning a fifth installment is in the works.

Indiana Jones and the Kingdom of the Crystal Skull - Trailer

“Kingdom” finds Indy (Harrison Ford) racing the Russians to find a crystal skull which could give great power to its holder. Or something like that.

En route, Indy teams up with Mutt (Shia LaBeouf), a rebel without a clue. He says his mother and an old mentor of Indy’s (John Hurt) have been captured by the same Russians gunning for the skull.

That squad is led by Cate Blanchett’s Irina Spalko, who speaks in a cheesy Russian dialect but fights with the ferocity of a small army. No matter, since she’s still about as frightening as a pimply-faced movie usher.

Along the way, Indy gets fired from his university for associating with a double agent and survives a nuclear blast.

It’s a by-the-numbers adventure painted by a master working without his muse. Either there’s precious little magic left in the Indy formula, or Spielberg and crew knew they didn‘t have to extend themselves to rake in a fortune.

Blame an anemic script which relies so heavily on pent-up nostalgia it can’t move these characters forward so much as an inch. And what a shame, since a better screenplay would have run wild with the Indy/Marion reunion. But all Karen Allen’s Marion gets to do is look content to be back in the franchise’s good graces. 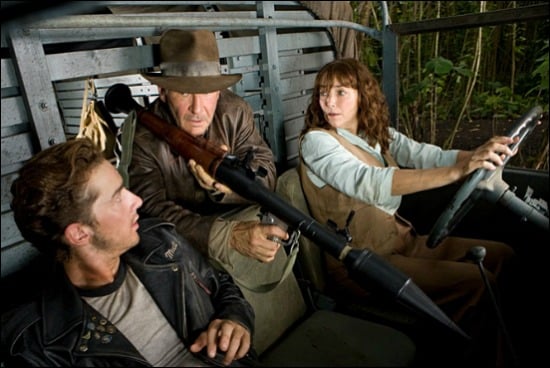 LaBeouf, who showed star potential anchoring the first three “Transformers” films, is only adequate in a pivotal role. Mutt is a slick-haired poseur who can take a punch better than expected. There’s little connection between him and Indy, and their bickering stands as one of many weak elements that should have been addressed in early script rewrites.

And if you moaned when Indy, Short Round and Willie used a yellow raft to survive jumping out of a plane in “Temple of Doom,” just you wait. There’s one sequence in “Kingdom” that makes that moment seem like it was ripped from a documentary.

The film’s final third devolves into a mush of crude FX and revelations that don’t feel connected to the franchise.

“Indiana Jones and the Kingdom of the Crystal Skull” might be seen as a solid, if unspectacular adventure had the three Indy films not preceded it. Now, Team Indy has what could be one last chance to end the franchise on the right note. They didn’t come anywhere close in 2008.