When I’m not writing and directing movies, I teach the language of film and the craft of speaking said language. On the first day of my directing class, I often joke to my students: “You might regret going to film school—not because you won’t learn how to make a movie, but because after you learn how to identify and deconstruct the elements of filmmaking, your days of enjoying movies are over.”

I remember the moment I wanted to become a director quite vividly. I was about 10 years old and it was while I was watching an episode of “Twin Peaks.” I didn’t know it at the time, but I happened to be watching one of a handful of episodes directed by David Lynch.

I had watched a lot of movies and seen plenty of television before then, but this was the first time I recognized that there was a creative mind behind it all, who was in deft control of my emotions. At that moment, I knew I wanted to learn how to do whatever the “maker” of this show was doing.

Just like a well-written sentence, a viewer should be able to watch a scene from a movie and be lead intellectually, and emotionally, from one point to the next in a logical, coherent and dramatic fashion. The magic trick the director must pull off, of course, is to do this without the audience knowing he or she is doing this. The director makes conscious choices regarding visual and audio elements that ultimately affect the viewer on a subconscious level.

These are the elements that the director has at his or her disposal, which when combined together, or run in contrast to each other, have the ability to create the appropriate amount of drama:

While the above list may seem basic, and perhaps obvious, there’s nothing obvious about the vast amount of combinations of those elements that a director can use to tell his or her story, delineate character arc and convey transferrable emotion to an audience.

Becoming familiar with the “Elements of Filmmaking Style” can broaden your appreciation of film; however there’s a pro and con to this awareness. The con: When a lesser film is manipulating you, you will be able to see the manipulations for what they are. The machinations of a particular filmmaking process can distract from your surface enjoyment of the film. But is this necessarily a bad thing? I don’t think so.

Just because you couldn’t see the flaws before, doesn’t mean they weren’t there. More importantly, the pro far outweighs the con: When you see an exceptional film, you are able to identify and fully appreciate the technique and artistry of it, which deepens your experience and connection to the movie.

Let’s take the opening of “Whiplash” as an example of what I think is a good film; your enjoyment may be enhanced by a recognition of its filmmaking elements.

The film opens with snare drum hits under a black screen. It’s a “march” reminiscent of antiquated military drum core keeping soldiers in time, except this beat gets faster, faster and faster. As the beat finishes, the first shot is revealed to us. It’s a long shot that dollies through a hallway toward our main character, Andrew Neimann, played by Miles Teller. He’s playing the drums alone; he’s on his time, no one else’s. Until, we are introduced to Dr. Terence Fletcher, played by J.K. Simmons in his Oscar-Winning performance.

In a movie that’s filled with rapid editing, the first shot is notable for its wholeness. It only cuts when Fletcher enters the room and enters Andrew’s life — as far as we can tell, Andrew’s life on screen did not necessitate a single edit … until he met Fletcher.

At the end of the movie, the language of the film begins to counterpoint this idea. After Andrew is humiliated off the stage, he decides to do a one-eighty and walk right back out there. He gets behind the drums, undermines Fletcher’s authority as conductor and starts his own rhythm. He establishes his own tempo, which the editor, Tom Cross, punctuates by jump-cutting closer and closer to Andrew, closer and closer to the rhythm he has created for Fletcher, for the musicians, and for everyone watching and listening (in the concert hall and in the movie theater).

The film is cutting to his drumbeat. It is Andrew, not Fletcher, who is now in control of the edit. 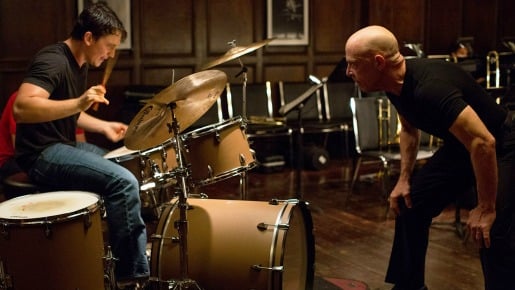 The entire world of the film, which was once set to Fletcher’s tempo, now moves to Andrew’s tempo. And we know that because the editing is telling us that. Andrew has found his time, he’s found his rhythm in this world, and it is entirely unique, entirely his own, and not determined by anyone else but him.

In a sense, he’s back to the beginning, in that first shot before Fletcher stepped into his life: he’s playing alone; he’s on his time, no one else’s. But, now he is great. And to become great, he had to reach inside himself and find that greatness. We all must aspire to find our own time, our own rhythm, inside of ourselves: that is the theme of “Whiplash.”

Now, you may have enjoyed “Whiplash” even without knowing why, but doesn’t it deepen the experience that much more to understand one of the specific reasons why it was so enjoyable?

When it comes to manuals on filmmaking, I think they should be just that: manuals. With respect to my book, I wanted to create a Strunk & White-esque guide to the language of film, with a specific emphasis on directing. Just as Strunk & White’s “The Elements of Style” outlines rules of word usage, the principles of composition and all matters of structure, grammar and punctuation, I wanted to do the same for visual language. It is just as important as written language, and it should be treated with the same amount of cultural importance, seriousness and academic rigor.

When audiences go to the movies, or watch an episode of television, or watch a viral video online, they should know how and why they are being affected emotionally. The public is schooled in the craft of speaking, reading and writing, should we not also be schooled in the language of the motion picture?

WILLIAM DICKERSON graduated from The College of The Holy Cross with a Bachelor’s Degree in English and received his Master of Fine Arts in Directing from The American Film Institute. He is a writer and director whose debut feature film, “Detour,” was hailed as an “Underground Hit” by The Village Voice, an “emotional and psychological roller-coaster ride” by The Examiner, and nothing short of “authentic” by The New York Times. He self-released his metafictional satire, “The Mirror,” which opened YoFi Fest’s inaugural film festival in 2013. He recently completed his third feature film, “Don’t Look Back,” for MarVista Entertainment. His award-winning work has been recognized by film festivals across the country. His first book, “No Alternative,” was declared, “a sympathetic coming-of-age story deeply embedded in ‘90s music” by Kirkus Reviews. He currently serves on AFI’s Alumni Executive Board and is a Faculty Member at the New York Film Academy. He lives in Los Angeles, California. You can follow him on Twitter and Facebook.