The former “Family Feud” emcee ruled as the slick-talking game show host, a font of charisma in a sea of dead-eyed performances and campy sets.

Schwarzenegger would go on to make better movies, both comedies (“Twins”) and bare-knuckled action flicks (“Terminator 2”). But it’s a shame the film marked the last screen role for Dawson.

Maybe the tiny stretch required to play the host of a brutal game show was all he had in him, but the performance is so note perfect it makes one wish Hollywood had given him another shot.

The year is 2017, and a draconian government has taken over. Food rationing is the norm, as are other freedom squashing initiatives.

To please the starving masses, the government stages a game show called “The Running Man” pitting criminals versus “stalkers” who deliver final justice. Consider it a precursor to those “Hunger Games.”

The show’s host, an evil charmer named Killian (Dawson), recruits Ben to be the show’s next contestant. Ratings are down, and Ben has fire in his belly. But Killian didn’t expect Ben to give as good as he gets … and often better.

The story delivers the standard bleak peek at our future. So why is everyone wearing shoulder pads and ’80s hairstyles? It’s always fun to watch futuristic movies which can’t predict even basic elements of future technology. Case in point: People still talk on telephones with cords attached to them! 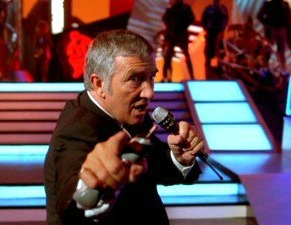 Setting anachronisms aside, “The Running Man” is second-tier Schwarzenegger with some impressive details. Dawson rules as Killian, holding the entire enterprise together until the sporadically clever action sequences commence. The casting at the time was zeitgeist perfect. Dawson ruled the boob tube as the “Family Feud” man, and it didn’t take much tinkering to bring that persona to the big screen.

But it’s hardly a phoned in performance. Killian is smarmy and cruel but a showman to the last. He knows precisely what it takes to make the ratings spike.

The screenplay delivers a few smart wrinkles, too, like when Ben is given a court-appointed talent agent before entering the Running Man arena. And casting Mick Fleetwood and Dweezil Zappa as freedom fighters is just plain fun. But “The Running Man” overloads us with patented Schwarzenegger puns whenever he dispatches a bad guy.

At the time, “The Running Man” was just another Schwarzenegger blockbuster. Seen today, it’s a showcase for Dawson’s sly spin on his own persona.

DID YOU KNOW: Stephen King wrote several novels under the pseudonym Richard Bachman, including the novel “Thinner” and “The Running Man,” the latter inspiring the Schwarzenegger film.