He’s partially successful with “Salvador,” an acting showcase for James Woods which could double as a primer for everything right – and wrong – with Stone’s body of work.

The film doesn’t grab the attention that some of Stone’s other films receive. It’s less glitzy than “Wall Street,” grittier than “W.” and more authentic than “World Trade Center.”

But even though “Salvador” is based on a real story, Stone can’t stop himself from retreating to his ideological soap box. And his film never recovers once Stone’s characters start taking sides in the conflict they’re covering.

“Salvador” casts Woods as Richard Boyle, a selfish photojournalist with a mouth that’s even faster than his camera’s shutter. Richard convinces a longtime pal (James Belushi) to travel with him to (El) Salvador in the hopes of securing some work. Plus, the two can partake in all the drugs – and local lovelies – the country has to offer.

Or so they think.

The pair quickly enmesh themselves in the social chaos engulfing the country. Richard wants to secure a paying gig – and perhaps settle down with an old flame. But the battle between governmental forces and rebels trying to unseat the existing leadership keep getting in the way.

People are dying, and suddenly Richard feels a flicker of humanity stirring within him.

The true geopolitical context here is dense and difficult to hammer down in any one movie. But Stone pretends it’s a snap to sort out the white hats from the black. U.S. backed government = bad. Rebels = good. 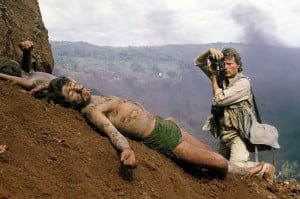 That doesn’t matter so long as Woods is wheeling and dealing. It’s the perfect vehicle for his manic energy and unbridled charisma. Who cares that Richard is a bastard you wouldn’t trust with your pet goldfish?

But when Richard starts pontificating about the country’s growing body count, the film loses its footing. Suddenly, he’s jawing with diplomats and bleached blonde newscasters at cocktail parties, all the while the hyperactive story all but shuts down.

The film may be based on true characters, but the final half hour stretches beyond reason and packs too many pat situations. The final five minutes play out like a “Saturday Night Live” movie spoof.

Belushi, who toiled as comic relief in a few ’80s films, is the nice surprise here, balancing his character’s excesses with an Everyman’s view of the deteriorating situation.

It doesn’t matter how Stone feels about the politics behind “Salvador.” What counts is that he takes a fascinating character study and twists it for his own ideological purposes. All the while losing site of what might have been one of his best features.

DID YOU KNOW: Oliver Stone dedicated ‘Salvador,’ his first directorial effort, to his father. Stone’s dad passed away the year before the film’s release.