That may not be a sentence you expect for a ’90s action movie starring Keanu Reeves chasing bank-robbing surfers. It’s true all the same.

Reeves’ Johnny Utah (one of the best movie names of all time) has a theory about a group of bank robbers that make his FBI superiors laugh him out of the office. Utah believes the “Ex-Presidents” are just surfers looking for money to keep their summer vacation fueled forever.

The villains got their name from the presidential masks they wear while robbing banks. And don’t worry, they’re not all Republicans.

In a crazy bit of ’90s movie logic, Utah decides to infiltrate the group, take part in their surfing and bank robbing, and then to take them down.

What he doesn’t expect is to fall in love (with the wonderful Lori Petty). He also learns facets of his personality through his friendship with Bodhi (Patrick Swayze), who also sports a killer character name.

“Point Break” should have been an empty-headed, extreme sports action romp to be lumped in with other ’90s action flicks. The film’s secret ingredient? Director Kathryn Bigelow.

Bigelow went on to win an Oscar for 2012’s “The Hurt Locker” and score more nominations for “Zero Dark Thirty.” Her talent, however, was evident back in 1991. Perhaps it’s her female perspective or an ability to recognize the emotions boiling below the surface of outlaw souls.

There’s a football game where Utah has to prove his worth, plus a parade of surfing, beach fighting and sky diving. Bigelow uses her camera to capture each in ways that makes them seem unexpected.

Bigelow also focuses heavily on the bond between Bodhi and Utah. Why do these odd physical bits of prowess mean anything to these guys? It makes “Point Break” different than other genre films, and likely its recent remake.

So many movies have borrowed the “Point Break” concept (like the “Fast & Furious” franchise). They couldn’t match the original because they forget the most important part – the film’s relationships and the fighting philosophies at play.

Bigelow isn’t afraid to linger on characters and situations long enough for the debate to rage within us (as it does in Utah). Who are the real bad guys? Where do these these oddball characters fit into this not so black and white world? 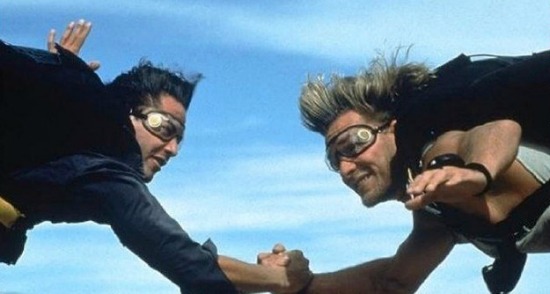 Beyond its philosophical core, “Point Break” is one of best-looking movies of its decade. There are scenes and sequences that can stand shoulder to shoulder with any action classic.

Consider the unforgettable sequence where Reeves and Swayze chase each other through suburbs dodging in and out of houses. It’ll make sweat form on your brow, thanks to Bigelow’s original, unflinching eye.

Even the more ridiculous moments walk a tonal tightrope that fuels the movie’s vibe. The movie puts all its cards on the table through its most outlandish moments, like when Utah lets Bodhi escape and shoots his gun into the air while screaming in ridiculous, macho rage.

There’s a reason “Point Break” has earned a cult following. The remake might contain some wild and rare stunts, but can it capture the original’s unique, philosophical touch? Do yourself a favor. Rent or stream “Point Break” any way you can.