Which begs the question …. why bother?

Vince Vaughn’s latest comedy has its heart in the right place. It trumpets a can-do spirit, connected parenting and the value of grit.

Getting there requires a trip through some awkwardly raunchy gags that rarely match the material. It’s like sitting down to dinner with your grandparents and hearing them drop a torrent of F-bombs while passing the potatoes.

Vaughn plays Dan Trunkman, a salesman sick of being treated shabbily by his boss (Sienna Miller). So he quits in the film’s opening moments, setting up his own company in hopes of wrestling away some of her clients.

Flash forward a year later, and Dan’s company barely has a pulse. But if he can complete a handshake deal with a smarmy executive (James Marsden) he’ll live to sell another day.

He’s not fighting his old boss alone. Along for the ride are Mike Pancake (Dave Franco) and Timothy McWinters (Tom Wilkinson), his less than able recruits.

Vaughn’s evolution from “Wedding Crasher” to middle-aged mensch is a pleasure to behold … to a point. You can’t keep up that rapid patter shtick indefinitely, and his recent films show him seguing into the kind of guy with whom you’d happily share a beer. Too bad his box office receipts continue to shrink, something that likely will continue with this comedy.

The movie force feeds him sympathetic moments that aren’t always earned. Yes, he’s a doting daddy who wants to help his son survive his school’s bullies. But the subplot it so awkwardly jammed into the narrative the effect is dizzying, not goosebump inspiring.

The same holds true for the jokes, some of which are admittedly inspired. Vaughn’s characters can’t find a room during a key part of their business trip. So he ends up as part of an art “installation” where strangers gape at him getting dressed for a big meeting.

It’s a surreal sight that somehow works. That doesn’t hold true for the rest of the running gags. Giving Franco’s character the “Pancake” surname is just comic desperation. But it’s downright genius compared to a gay bathhouse sequence that ends with Franco’s face rubbing up against a large, flaccid penis.

Happens all the time on business trips, right? 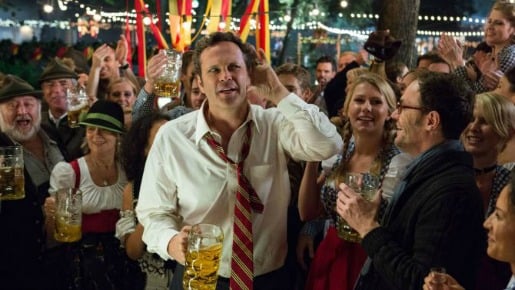 Franco’s character is alternately dumb and shrewd, a socially challenged soul who becomes a chick magnet if the scene calls for a goofy sexual position.

There’s not much Wilkinson can do with Timothy, a sad sack stuck in a bad marriage. But he’s better off than Miller, who looks game for an epic smackdown with Dan that never materializes.

You don’t have to squint to see echoes of Vaughn’s libertarian streak in “Unfinished Business.” Sexuality comes up often in the story and without condemnation. Dan’s willingness to do whatever it takes to succeed applauds that all-American work ethic. And Nick Frost’s turn as a gay business associate plays out with warmth, not anger.

DID YOU KNOW: Vince Vaughn’s sister, Valeri Vaughn, directed the documentary “Art of Conflict” about murals in Northern Ireland. Her brother narrated and co-produced the film.