The latest from Andy and Lana Wachowski, slated for a Summer 2014 release, infamously got bumped from its slot due to special effects tweaking.

It’s easy to be cynical, but the “Matrix” maestros flash enough ambition to power a half-dozen franchises. That hardly equates to a compelling story, a serious flaw in a movie meant to stand tall next to previous space epics.

Mila Kunis stars as Jupiter, the least convincing cleaning woman in the history of cinema. She’s stuck in her thankless gig until she learns of her unique royal lineage. Her DNA connects her to a race of aliens who can’t stop squabbling over land, power and a rather ghastly youth serum.

That puts Jupiter in danger, but have no fear. A manbeast who looks like Channing Tatum after a furry makeover is here to protect her. Together, they’ll battle against the soft-spoken menace that is Balem (Eddie Redmayne) and evade the twisted loyalties of two other royal creeps (Tuppence Middleton, Douglas Booth).

It’s story soup with some pretty thick broth, but somehow both Kunis and Tatum retain their dignity and flash chemistry along the way. Shouldn’t there at least be a Golden Globe category for that? 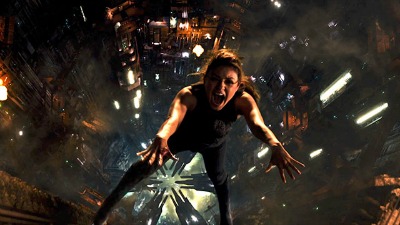 It’s all pretty to look at until those expensive action scenes kick in. Think the “Transformers” battles were hard to follow? You haven’t lived until this eye candy explodes into a thousand zeroes and ones before your eyes.

The worst, and by worst we mean perhaps the most poorly conceived set piece in modern screen history, has co-star Sean Bean and Tatum navigating through a hail of hammers .. in space.

The film’s dialogue is alternately imperious and clunky, like a high school scribe trying to pen a Serious Space Opera. The comic relief, and boy does the film need it, falls on the broad side. You’ll cringe over Jupiter’s wacky Russian brood, a misbegotten pitch for a “My Big Fat Russian Wedding” spinoff.

One comic sequence smites government bureaucracy with a tribute to “Brazil” added for good measure. Comedy in the wrong hands is a serious offense.

“Jupiter Ascending” outdoes “Elysium” and its science fiction peers by integrating its class warfare rhetoric into the narrative. Once more we’re cautioned about just how wicked the affluent can be when handed unchecked power. It’s nothing we haven’t heard before, but the Wachowskis deserve credit for not adding soapbox sermons to the film’s flaw chart.

“Jupiter Ascending” isn’t “Ishtar” meets “Waterworld.” It’s merely a hyper-ambitious saga salvaged by stars who know not to take it all too seriously. That makes it a serviceable February release wisely saved from a summer movie beating.