“Hard Sell” plays out like a potpourri of teen tropes, blended in a less than assured fashion. It boasts an impressive lead performance and a script touching on emotions we all faced during those awkward teen years.

The film’s not so secret weapon? You get two coming of age yarns for the price of one.

Skyler Gisondo is Hardy, a teen baffled by his day-to-day existence. His mom (Kristin Chenoweth) is a drunk. He’s hardly the most popular kid in his prestigious prep school. And when he meets a beautiful stranger he can’t even pretend he has a chance to woo her.

Bo (“30 Rock’s” Katrina Bowden) is a true mystery. She says she’s a former stripper looking for a fresh start, but everything about her suggests something … more complicated.

She’s world weary and wise all at once. And don’t ever mistake her for a victim.

FAST FACT: Skyler Gisondo’s “promposal” to his high school crush came via a video featuring Ben Stiller and Robin Williams. They were all working together on the set of “Night at the Museum 3” at the time.

Bo doesn’t mind taking her top off to titillate Hardy’s prep school pals … for a price. But that subplot isn’t the driving force here. Consider it trailer fodder extraordinaire.

Instead, it’s about Hardy and Bo’s unusual connection. Lost souls sometimes need each other dearly. 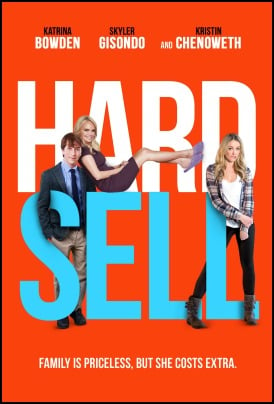 First time writer/director Sean Nalaboff coaxes droll performances out of his cast. Gisondo (2015’s “Vacation”) was born for this kind of teen drama. His sandpaper voice betrays his physical innocence. And Chenoweth, given an underwritten role, shrewdly keeps the volume low.

It’s not Bowden’s fault that her character doesn’t make perfect sense. She’s idealized and stricken at once, but the actress sometimes brings those competing elements together.

Nalaboff clearly has it in for authority figures here. The prep school leaders are uniformly foul, giving the film a populist sheen sure to make teens cheer. They might not be satisfied with the film’s modest rewards, though, or how Hardy’s best shot at success is simply trusting his gut.

“Hard Sell” boasts a winsome soundtrack, the film’s most conventional element. Everything else here may feel familiar, but it’s all given a slight, but never impersonal, twist.

What the film can’t sell is Hardy’s Big Speech in the third act. What should have been the movie’s emotional peak ends up as one last kick to the school employees’ shins.

“Hard Sell” can’t resist tying up more loose ends than required. Then again, who doesn’t want a coming of age movie to find its hero – and heroine – ready for new tomorrows?