Or is it because these elements fuse seamlessly together to tell a metaphoric story larger than simply what’s happening on screen?

Since the release of the first “Matrix” movie 15 years ago, philosophers have spent countless hours analyzing the ethical and moral conundrums presented in the franchise. Some have said it represents capitalism’s stranglehold on western society. Others claim it’s a metaphor for current-day state control over an unknowingly-enslaved public.

No matter what your take, though, it’s undeniable that “The Matrix” is about more than just literal machines controlling humans.

This ‘more than’ is the reason it resonates with audiences. The best science fiction and fantasy is always more than simply what you see before you. Great art often explains things in ways we may not have considered.

Like Orwell, I’m telling a tale about how society can function—or dysfunction—when the corrupt take control. But unlike “Animal Farm,” which really just explores the idea of state-forced socialism, my “Ant Farm” explores the perils of any state-forced system, even a democratic one like so many nations have in place today.

Instead of animals, I use talking insects (evil cockroaches, anyone?) to drive my story, and I try to show how police protection, roads, schools and dozens of other institutions and issues can function both in a total free market, and also under government control.

My hope is that people will find “Ant Farm” to be at times entertaining and humorous (the fictional countries of Cantada and Somaliant are quite clever, if I do say so myself), but also educational about what’s happening around us today, and what the implications are.

This is why recent films like “The Expendables” and “Need for Speed” won’t have the lasting impact of “2001: A Space Odyssey” or “Minority Report” or even “The Matrix.” The former ones certainly provide high-intensity entertainment that can keep you glued to your seat for a couple of hours.

Like the latter-mentioned films, I hope “Ant Farm: A Novel About What’s Bugging Society” will also make audiences contemplate the deeper questions that make them say – just like a young Keanu Reeves, “Whoa.” 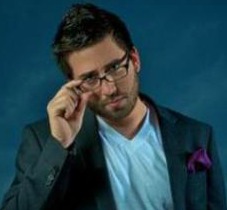 Stephen Aaron Grey is passionate about liberty. Having traveled the globe as an acclaimed DJ and entertainer (stage name: Freaky Flow), he has come to recognize that freedom works and forced control does not. Grey’s book “Ant Farm: A Novel About What’s Bugging Society” expresses these ideas in a creative narrative that anyone can easily understand. With an academic history focused on world religions, to boot, Grey possesses an added cultural sensitivity, which contributes to the universal impact of the philosophies that he holds so dear. “Ant Farm” is sold on Amazon, and you may download the first four chapters first for free. You can follow Stephen on Facebook and Twitter.