Remember that swords and sandals romp? It never took itself seriously, and it lacked a single dull frame. Sure, it was pure cheese, but it came perfectly melted for teens indifferent to film craft.

“Gods” mines a similar Velveeta vein. It’s easy to mock — and the crush of CGI effects almost makes it feel like a relic. Don’t you know “The Force Awakens” shamed filmmakers into using practical FX along with computer wizardry?

For all the eye-rolling it’ll inspire, “Gods of Egypt” gallops along knowing it’s hopelessly silly. And there’s something refreshing about that.

“Egypt” gives us a world where gods and mortals share the same space, although the former dwarf the latter by a good five feet. That balance between the groups has been kept by King Osiris (Bryan Brown …. good to see you again). Now, he’s stepping down in favor of his son, Horus (Nikolaj Coster-Waldau).

Not so fast. Osiris’ cranky brother Set (Gerard Butler, gargling on his Scottish accent) crashes the transition ceremony. Set slays Osiris and banishes Horus by scooping out his eyeballs. It’s far less gory than it sounds, to be fair.

Set’s in charge now, and he’s hardly the guy you want calling the shots.

Can a mere mortal, the lovestruck Bek (Brenton Thwaites), help Horus win back the throne? And did Ancient Egypt have as many push-up bras as we see here? 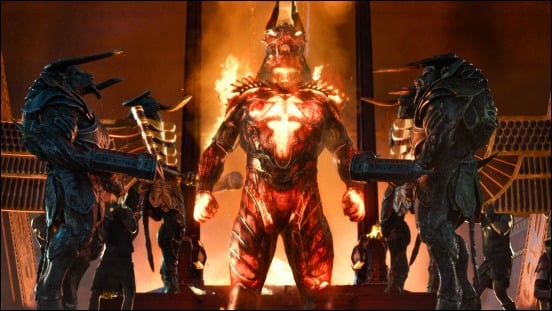 In case you can’t tell, this isn’t a strict historical interpretation. The film’s FX sequences careen from credible to cartoon-like, and the performances are similarly broad. You almost wish “Gods of Egypt” would go the full “Flash Gordon.” One can dream.

Instead, we’re left with stale banter between Bek and Horus, who both look like Teen Beat alums commiserating on their dwindling fan bases. It’s mismatched buddy movie time, only “Gods'” screenplay isn’t witty enough to pull the gig off.

A few scenes thrill as intended, like an otherwise nonsensical attack from some CGI-generated super-snakes. And watching Geoffrey Rush ham it up as Ra, resplendent in his bald head and glowing robes, is to know even Oscar winners want easy paychecks.

Director Alex Proyas (“Dark City,” “I, Robot”) isn’t always sure what movie he wants us to see. An early action sequence recalls that “Matrix”-style choreography. Later, the gimmick goes by the waste side in favor of traditional fight clubbing.

“Gods of Egypt” is what you’d see if George Lucas got a hankering for the subject matter. But ol’ George would have thought he was making “Laurence of Arabia,” not this generation’s guilty pleasure classic.