“John Carpenter’s Ghosts of Mars” is nutty from the very start.

Only a few seconds into the movie and we’re hit with a slew of title cards, all of which come and go too quickly and drop the following chunks of exposition in our laps: the setting is Mars, in the year 2176 A.D., and the planet has 640,000 colonists.

In this matriarchal society, something has been uncovered. There’s also a Mars Police Force laying down the law. Wow, is there going to be a quiz later, Mr. Carpenter?

After an exposition dump far heavier than in either of Carpenter’s Snake Plissken adventures, it’s on to the semi-convincing exterior shots of the red plant, the opening credits and one of Carpenter’s great, throbbing electronic scores.

Natasha Henstridge is Lt. Ballard, who is being held for questioning and is informed that her rights are being protected by “The Matronage.” Ballard and her crew discover a Martian town overtaken by Martian zombies, who are formerly humans that are possessed by the angry ghosts of an extraterrestrial presence.

What proceeds is the film-length flashback as to what exactly happened to her and her crew as they encountered criminal James “Desolation” Williams, played by Ice Cube, and a planet full of angry Martian colonists possessed by alien spirits.

RELATED: Why John Carpenter’s ‘The Fog’ Deserves Your Respect

Jason Statham, post-“Snatch” but pre-“The Transporter,” looking strange with a head of hair, is Sgt. Jericho. Reportedly, Statham was once the lead and paired with Courtney Love; when she was replaced by Henstridge, Statham was given the smaller role of Jericho. Statham is game and acquits himself well.

Joanna Cassidy is also in this, which should make her a bigger cult favorite than she already is (quick, name an actor who has worked with Carpenter, Ridley Scott, Wes Craven, Robert Zemeckis and John Boorman!). It’s Statham who stands out the most – he clearly had the charisma to carry his own film later.

In the leads, Cube and Henstridge are so much to watch in this. She visibly relishes the chance to play a strong lead, while Cube is a great pick for a lovable anti-hero; their final two scenes together couldn’t be better.

Carpenter co-wrote the screenplay with Larry Sulkis. There are flashbacks within flashbacks, “tough guy” banter like, “I want you all jack-ready and double-tough” and “Beacoup corpses, all mutilated” (Grier gets to rattle off those early on).

Later, Henstridge informs Statham, “Maybe I’d sleep with you if you were the last man on Earth…but we’re not on Earth.”

There’s also an arresting simultaneous drug trip and flashback to the Mars’ history of an alien presence. It’s overstuffed with ideas and so quick on its feet, not enough of these concepts are fully explored.

It’s amusing to consider this cost $28 million, when “John Carpenter’s “Escape from L.A.” (1996) had a reportedly $50 million budget: both films showcase sets that are kind of cool looking but obviously phony, with screen saver-worthy CGI backdrops.

It’s silly and clunky at times but there’s also a playfulness and plenty of burly action. If it’s a self-conscious B-movie, at least it’s a good one, with more than a few story and thematic elements that connect it directly to Carpenter’s body of work.

This Mars-set western has aspects of Carpenter’s “Assault on Precinct 13” (1976), particularly the concept of lawmen and criminals working together against an overwhelming mob. There’s also commentary on colonization and the value of a matriarchal society, though the campy dialog and gore tend to drown this out.

Carpenter isn’t above “jump scares,” though, in fairness, he helped invent them: if “Wait Until Dark” has the earliest mainstream example, then “Halloween” at least developed the technique.

In 2012, I interviewed Ice Cube in Denver while he was doing a press tour for “21 Jump St.” Speaking with him was a highlight of my career covering film. Cube gave frank answers to every question and was open and engaged the entire time.

His publicist entered the room at the end, alerting us his time was up. Cube generously asked if I had any more questions, so I asked him about this movie. I explained how I loved seeing him in this genre, was aware of the film’s reputation as a failure but wanted to know his thoughts on it.

He thoughtfully replied that the film had “underground fans” and that the film was “cool, but it needed better special effects.” He’s absolutely right. 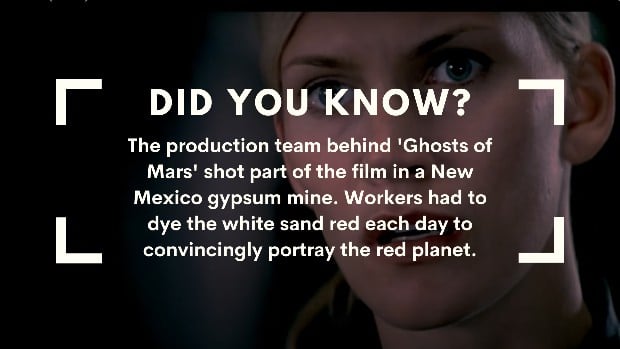 The visual effects look better on the small screen, though anything digital stands out here for being not fully convincing. However, Carpenter deserves credit for not overdoing the pixelated f/x, either. The stand-out scenes are the large-scale shoot outs and fight scenes, as well as Carpenter laying down more wild ideas.

Unlike most 2001 blockbusters (like “The Mummy Returns”), Carpenter doesn’t rely on post-production for spectacle.

There’s an internet rumor that Carpenter altered his planned third Snake Plissken adventure into this, meaning Desolation Williams was originally Plissken and that this was supposed to “Escape from Mars.”

It’s interesting to consider this, only it’s well known to Carpenter fans that he’s been sitting on his “Escape from Earth” script since the 1990s. This rumor is akin to the unproven suggestion that “Big Trouble in Little China” was a re-tooled “Buckaroo Banzai” sequel- in the same way, you can see why this rumor has stuck around but it’s still a stretch.

The admittedly surprising “Two Thumbs Up” from Roger Ebert and Richard Roeper was among the few who endorsed the film. Otherwise, the film vacated theaters quickly and, at the time, was widely considered a low point for the director.

In celebration of Ghosts of Mars’ 20th anniversary, the epic soundtrack will be released on “Red Planet” vinyl. John Carpenter recruited an unbelievable cast of musicians to record the soundtrack to this sci-fi horror film, starring Ice Cube and Natasha Henstridge. pic.twitter.com/LpNHqGCYAF

Despite sporting a terrific trailer, narrated by no less than Keith David (star of Carpenter’s “The Thing” and “They Live”) and great use of BT’s “Smartbomb,” and Carpenter’s name and the star power, it didn’t connect in theaters.

Carpenter is clearly having fun and, if you’re in sync with his cracked vision and its flavorful blend of genres, you will too.

Unlike “Mission to Mars” and “Red Planet” (both 2000), Carpenter’s take on the trend is refreshingly unpretentious, mean, down and dirty. It’s also a B-movie with A-grade entertainment value, though, as Cube suggested, they should have spent far more Hillary’s on the special effects (relax, it’s a “Pluto Nash” joke).

The make-up effects were done by the legendary trio of Robert Kurtzman, Greg Nicotero and Howard Berger, who go full tilt on this. There are lots of decapitations, though there’s a great accidental finger severing, too.

There’s a scary, scowling villain who is credited as Big Daddy Mars. We also get scenes depicting the POV of Martian ghosts (basically just red glare over an image)

There’s also this gem of a closing bit: Cube enters a room, states, “Tide is high, time to stay alive,” cocks his gun and winks at Henstridge (and us).

Earthlings, you don’t deserve this movie.