Even less have been good or even authentic in any way.

” tries to capture what it’s like to be a millennial entering today’s work climate.

Evolving economies. Uncertain futures. Hordes of hostile older generations shaking their heads at everything they represent. 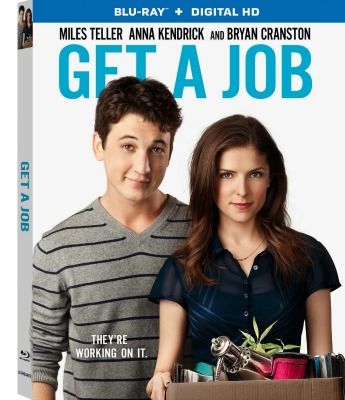 With a cast that includes Miles Teller, Anna Kendrick and Bryan Cranston, “Get a Job” should have been the film to really connect with audiences.

Its story might open our eyes to the different viewpoints of today, both for Millennials struggling to survive and older generations scrambling to adapt.

Alas, “Get a Job” is instead a much-delayed VOD release that feels long at just over 80 minutes.

Save for a smattering of genuine insight, “Get a Job” is nothing more than a mediocre comedy about young dudes trying to get the world off their backs before their next bong hit.

If that were the actual movie this were ultimately striving to be, it’d be fine. Judd Apatow and Seth Rogen have long dominated dramedies about man-children learning to grow up and laughing through pot smoke at the same time.

“Get A Job,” however, doesn’t fit that mold. It seems like an unfinished film, and the makers simply pasted and glued together a mediocre attempt at a bro comedy with the light-hearted footage they already had.

Will (Teller) and Jillian (Kendrick) are recent college graduates and longtime lovebirds. Entering the job market turns out to be harder than they could have imagined. Shrinking companies and generational gaps stall their success. With Will’s father (Cranston) losing his job as well, both father and son face uncertain prospects.

As a millennial couple enduring the market’s harsh realities, the film is strongest when Will and Jillian lean on one another for support. Together, they face the challenge of mixing their dreams with some cold, hard truths.

DID YOU KNOW: “Get a Job” was filmed all the way back in 2012 but not released until this year.

However, this is where the film’s main fault becomes apparent: Kendrick is barely in this movie. The majority of her scenes are with Will, and we never follow her journey the way we should.

Their relationship should be the soul of the film, and yet it’s only Will’s perspective we see. Sure, Jillian loses her job, gets Will on his feet and struggles herself, but we only watch this through Will’s eyes. That feels wrong, incomplete even.

Jillian is a role an actress like Kendrick would be appalled to take today.

With only the bare bones of that relationship available, the closest thing the film has to a beating heart is the journey of father and son. The movie focuses a surprising amount on Cranston and his own struggles to re-enter a job market that doesn’t appreciate the loyalty and grit his generation idealized.

There are a couple heartfelt scenes between Cranston and Teller where the two reveal glimpses into the generation gap and the up and down swings of life as one gets older. The relationship is not fleshed out enough to provide any real center for the film.

Other than that, the movie follows Will and his friends in their various struggles to become adults and get jobs. Since none of the friends are three dimensional characters, it mostly adds up to a disjointed, sometimes funny, collection of short films. Teller does the best he can with his role, and we want to see more, but the finished film fails everyone involved.

RELATED: What Aziz Ansari Can Teach Us About Millennials

Art is sometimes about moments. We typically remember strong character moments more than specific story details. “Get a Job” has a handful of those beats. That’s why it’s such a disappointment to see this film ultimately fail.

There are three or four scenes between Teller and Kendrick and Teller and Cranston that evoke real emotion and provide flashes of gut-wrenching insight.

These moments are then dropped in favor of a film that mostly flounders and drags for its short run time. It’s too bad. If millennials need something today, it’s a real piece of art to tell their story, to define them in a divisive world that is socially and economically confusing. They need great stories just like every other generation did.

” includes a digital copy of the film, a feature on the impressive cast and outtakes.