John Henry Clayton reconnects with his father, a disapproving reverend played by Kiefer’s real-life father, the great Donald Sutherland. The young Clayton is trying to turn his back on his violent past. He doesn’t even wear a gun publicly. He still can’t seem to outride who he once was. After all, as Clayton sadly notes, “it’s what I know how to do.” 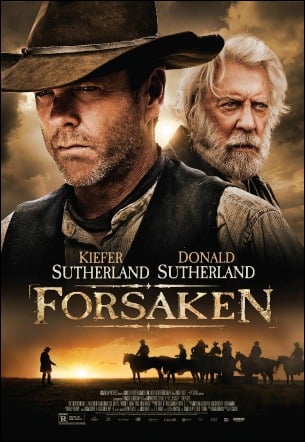 The involvement of Kiefer Sutherland brings to mind his stint as one of the “Young Guns,” and not in a positive way. Both “Young Guns” and “Young Guns II,” while gimmicky, youth-baiting depictions of Billy the Kid, were the real deal. They presented a rambunctious, even sweeping vision of the wild west as run by gun-toting madmen.

At the same time those films rejuvenated the image of the western for younger audiences, the cheaper, far less durable version, “The Young Riders,” hit television. The TV variant depicted the Pony Express but had a similar, tamer offering of young hunks twirling six shooters.

Whereas the “Young Guns” movies had the genre’s required grit and excitement, “The Young Riders” felt like a lightweight facsimile.

“Forsaken” suffers a similar problem. It’s not due to any comparisons to a recent film but from what one would want from a movie like this.

“Forsaken’s” sets are nice but appear too obviously constructed for this movie. Nothing appears lived in and everyone, likewise, looks too clean. It’s all very straightforward in its presentation. Despite the R-rated language and some violence, it could have been a TV movie. There’s no feel for style or scope. Only the shoot outs are staged with any snap.

The casting of Kiefer Sutherland as the reserved, former killer only makes it all the more predictable. Considering how many hot tempered killers he’s played before (without even acknowledging Jack Bauer on “24”), we know it’s only a matter of time before he takes action. Putting him in this role is as by-the-numbers as having Liam Neeson assigned the same part.

The elder Sutherland brings instant gravitas and his commanding presence to his role. While there is satisfaction in seeing the Sutherlands sharing screen time together, the material isn’t worthy of their efforts. They share a tough scene in an empty church together and their work, like everyone else here, is fully committed. If only the screenplay were better.

“Forsaken” wants to evoke the themes of “A History of Violence” and “Unforgiven,” but can’t even stand toe to toe with recent westerns like the “3:10 to Yuma” remake. Fans of the horse opera genre will be more forgiving, and I want to give this credit for evoking classical western traditions. Yet, there isn’t anything new for audiences raised on John Wayne…or even “The Young Riders.”

Actually, there is a moment I’ve never seen before. Late in the film, during the impressively violent final showdown, Clayton makes an unusual request. He’s about to do a high noon, mano y mano shootout on an empty road in front of town. All that’s missing is a tumbleweed. He suddenly realizes his gun is too heavy. So he asks his opponent for a time out to grab a lighter model.

Clint Eastwood’s Man With No Name never had it so good.