“Finding Altamira” teems with melodrama, and though based on true events the film is almost meek in how it treats reality.

Set in 1800s Spain, our focus is on a modern-thinking family man named Marcelino (Antonio Banderas). He is something of a secularist married to a religiously devout lover of the arts.

Yet they co-exist in a warm family living on a posh Spanish estate. Marcelino desires entry into the intelligentsia of his time, studying natural history and archaeology on his own and absorbing lectures by academics. Soon he is launched into the forefront of both the church and science community.

The location of a once hidden cave attracts Marcelino and his curious daughter, Maria. As he was busy prepping the site, Maria ventures deep inside the cave. She discovers paintings on the ceiling displaying bison, a species not present in that region for centuries.

Marcelino’s declaration of the artwork to possibly be thousands of years old raises the ire of the church. It creates conflict within the learned class as well. 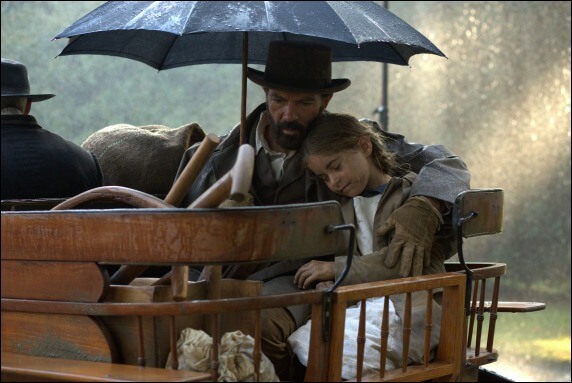 The Monsenor (an unrecognizably bald Rupert Everett) begins lobbying Marcelino’s wife Conchita. He implores her to win control of their daughter, who is being swayed by scientific thought. This is done as a means to control the revelation of the controversial contents.

Meanwhile Marcelino’s discovery also surprisingly creates tension among the academics. Professional jealousy and classism rear up to challenge his contentions. Soon the very minds he invites to analyze the paintings begin working instead to disprove the authenticity.

The desire to have his discovery revealed and his theories verified becomes a struggle. The resistance from the higher authorities brings tension into Marcelino’s idyllic home life as well.

Despite the ample material for an engrossing narrative the script feels like it underserves the story. It does absorb you into this era, but the intellectual drama does not feel fully revealed. Early on the academics have numerous talks about evolution, and a line from Marcelino about the paintings holds promise. He indicates the age and quality of the images shows an advanced human condition, one that presents a challenge to the origins theory.

However this is not taken deeper. The opposition to church dictums of science is blatant, since the paintings are said to be older than lectured time frame of Adam and Eve. What would have been more compelling is contrasting the academics reacting similar to the church when being challenged with evidence humans were far more advanced than Darwinian theory allows.

The two combative halls of thought having their standards equally rendered would make for more pathos.

The cinematography is lush and the era is served by the period costumes. This is a solemn, if understated return to filmmaking by British director Hugh Hudson (“Chariots Of Fire”), and his skills are evident. He guides Banderas in a performance that conveys genuine intellectual curiosity and a passion to reveal the world to his daughter.

We’re well placed in Hudson’s expert hands, and the leads deliver professional performances. We are just left wanting from a story that doesn’t go far enough. Ironically in a story about a mysterious cave discovery the script did not explore the subject matter deeply enough.