I can’t remember if I played a Montague or a Capulet but I was one of the first on stage, had a long slew of lines, fought a well choreographed sword fight, died, then waited two and a half hours backstage for the curtain call.

A detail that will never leave me was the conceptual choice of having my friend Michelle play an invisible embodiment of death: during the sword fights, she would douse us with blood. Gallons of it.

At the end of my opening sequence, I was soaked in a mixture of stage blood, detergent and some other chemical that made my skin break out. It was icky stuff but, considering the material, fitting that blood literally stained and stung my flesh.

Blood has a major presence in “Macbeth,” which is, along with “Titus Andronicus” and “Coriolanus,” one of Shakespeare’s most violent plays. A famously graphic film interpretation by Roman Polanski was released in 1971 but director Justin Kurzel latest take on the play will leave its mark as one of the substantial and definitive films from a work of the Bard.

Macbeth Official US Release Trailer (2015) - Michael Fassbender War Drama HD
Michael Fassbender stars as “the Scottish King,” driven to murder by the guidance of his unhinged wife (a riveting Marion Cotillard), three witches and a madness that always seems about to burst from within.

It opens with a battle sequence that, even with a few CGI enhancements, brings to mind “Braveheart” and not the overdone, video game-ready battles of the “300” series. The look of this appropriately grisly, intense film suggests visual odes to Ridley Scott and Akira Kurosawa, as the screen is awash in rich, eye popping visuals in every scene.

Fassbender’s work here is so much more thrilling to witness than anything in “Steve Jobs.” The key is in his eyes: he looks as though a detached, uninhibited state of mind has set in, as his eyes conjure up gazes of concentrated merriment, hatred and obsession, cloaking the fire beneath. 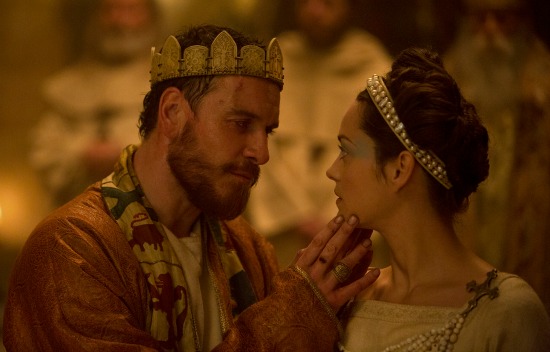 Just as good is Cotillard, who makes Lady Macbeth a scary, radiant figure. The stellar supporting cast includes David Thewlis and Kayla Fallon, Lynn Kennedy and Seylan Baxter, all mesmerizing as the witches. Yet, it’s Fassbender and Cotillard who hold the screen the start to finish. This is among their best film work.

The use of iambic pentameter and the original text is not always seamless. Some of the actors underplay their lines, which is not an unreasonable cinematic choice, but the lines deserve a theatrical, demonstrative panache that is often lacking.

Running under two hours, “Macbeth” maintains its core themes and hits its narrative marks, though purists may balk at the omissions. The witches are on screen more for their presence than their words, as the “double double toil and trouble” and other playful bits are gone.

DID YOU KNOW: When Shakespeare’s ‘Macbeth’ debuted, most people believed in both witches and the supernatural, which gave the play’s witch interludes an added measure of gravitas.

Be warned: This is a cold, grim film in which people die cruel, vivid deaths. Lacking a central figure to root for or connect with (even one as corrupt as Hamlet or King Lear), we latch onto Fassbender’s raving king and Cotillard’s conniving wife without total emotional investment.

The use of slow motion during the fight scenes is especially arresting, as is the red sunset that caps the film. The visuals are so strong, audiences unaccustomed to the language should have no problem following the story.

With imagery this rich, Kurzel’s “Macbeth” could have worked as a silent film. Take it from someone once caked in puddles of Shakespearean stage blood – you have never seen a “Macbeth” like this before.