Five years ago, I served as a congressional intern in Washington, DC and on Capitol Hill for a Member of the United States Congress.

No reason other than my interest in history, preservation, and storytelling drove me there. While there, I indulged in what those close to me describe as “my inner American history buff,” and it was love at first sight.

There is no place like the United States Capitol. Not a museum, not an exhibit, but a workplace for thousands of interns, aides and lawmakers brings energy and life into the long tradition of collaboration, compromise and fight. 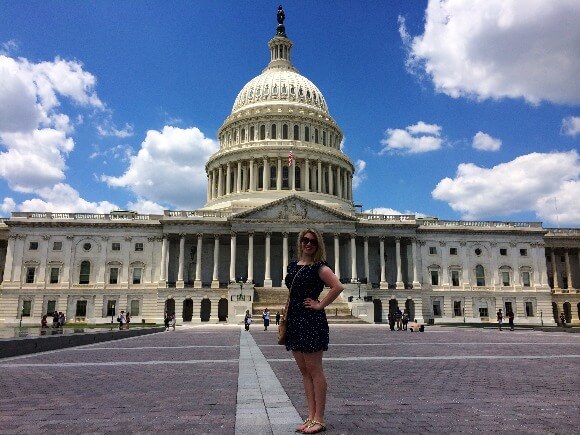 In the months following my time as an intern, a gnawing feeling became top of mind: I missed it. I missed giving tours of the building to folks from my hometown — or the Congressman’s “constituents” — who came to DC for reasons similar to mine: a behind the scenes look into American history, past present, and in progress.

What makes the United States Capitol a beacon of hope, history, and home for me is its intimacy. When you are physically there and you hear the echoes of the lawmakers’ shoes and witness hearings where change manifests, you know you’re not in a museum but a real, albeit more grand, office space.

The Capitol is, on a less glamorous yet even more accessible level, our nation’s office. During my summer there, I couldn’t get enough of being immersed in that nucleus of national discourse.

Time passed, and my career was beginning to take shape. It became more and more obvious that my midwestern heart would be sent west to L.A. and not back to D.C.. Although interning and giving tours of the United States Capitol was a high point in my developing professional life, I wasn’t certain a career in that lane would satisfy me in the long term.

I’m a writer. An entertainer. A creator.

Then it clicked. It was through my experiences and love for the Capitol that I would become an author.

“A Capitol Dream” was written, illustrated, essentially created to be a children’s guide to the U.S. Capitol Building, something, aside from this book, does not exist in the Capitol Visitors Center gift shop, the House gift shop, or the Senate gift shop.

Certainly there are books for students about the building and its history, but they are not as accessible for that 8-12 age range. They take the more traditional “guidebook” route, something I actively avoided.

Between the approach I took with the main character meeting historical figures whose likenesses are represented in the Capitol and the illustrations’ style, the art of storytelling as integrated into this book binds, pun intended, readers with the information it’s sharing in a much more intimate fashion.

“A Capitol Dream” is just the start. My plan is to continue to preserve history through a series covering multiple aspects of rooms and buildings on the Hill, including the Library of Congress and the Supreme Court, because the reality boils down to accessibility and making history personable in the way I felt it when I gave my tours.

You can’t bring the marble and sandstone-founded rooms of the Capitol to families in rural Illinois. Not all eighth-graders can load up on a bus and be in the Capitol Visitors Center in six hours for a field trip. The US Capitol, in all its richness, unfortunately will not be visited by all Americans who love and want to learn more about our country.

Show your Capitol Dreamers how history comes alive at the US Capitol Building at acapitoldream.com.

Emilie Kefalas is the author of “A Capitol Dream,” available now.