The common refrain about Hollywood having no more original ideas has an adjunct reality: many of their “new” ideas are better unrealized.

As an example, I give you “The Emoji Movie.”

The reaction to the film’s existence was nearly unanimous. Just how empty would the finished product be? It’s amazing that the end result falls short of that cynical projection.

What is stark about this, beyond the base humor that trips over that low bar, is how the script can’t stick to the standards it presents. But I suppose when you create a universe inside a smart phone populated by digital pictograms, common sense isn’t important.

Let’s scroll through the numerous issues on display and swipe at the ridiculous imagery.

In keeping with the practice of incorporating the production card into a movie’s universe, we see a smartphone take an Instagram shot of the Columbia logo.

The premise is that the emojis are a fully active community, living in a “town” called Textopolis inside of a smart phone app. To further deplete the level of interest they are in the phone of a high school freshman named Alex.

Our “hero” and narrator is Gene (T.J. Miller), the Meh emoji. While walking to his first day “on the phone” he has a tough time remaining his neutral self as he interacts with others. Meanwhile, in direct contrast, I’m confident I will have no problem remaining blasé’ throughout this affair.

During one scene approaching creative mirth Gene bumps into some senior citizen emoticons. One of them falls over and says, “Ow! My colon!” Punctuation entendres. It may not get any better than this.

Gene’s parents are at the office building. His father voiced by laconic comedian Steven Wright, so perfectly cast for the Meh emoji it feels like manipulative pandering. Additionally, Poop emoji is voiced by Patrick Stewart. The most creativity seems to be in the voice talent acquisition.

The High5 emoji (James Cordon) is trying to get in the lounge for the most popular emojis. He’s no longer on the list; the fist bump emoji is more popular, you see. High5 refers to him as a “knuckle head.” This is the humor directed at the kids … I hope.

Gene takes to his cube for the very first time. While texting a girl in class Alex selects him for the message. Gene panics during his scan and a disturbing looking emoji gets sent. In a bid to escape his cube (?) he jumps out and sets off events that lead to massive damage to the emoji arena. It’s all very…well, dramatic doesn’t seem to be accurate here. Er, “boisterous”…maybe?

Some suggest Gene may be a malfunction. Later, Gene has a rooftop discussion with his parents about his future. All of this strife is hinged upon a character who has the ability to display numerous emotions but can’t display his designated, non-emotive “Meh” characteristic. That is, he’s in trouble for essentially not being able to — not do something.

In the boardroom Smiley (she’s the Head Emoji – which seems like it would be an important detail, but honestly the word “important” has no place in this film) tells Gene a phalanx of anti-virus delete-bots will eliminate him. He manages to escape the digital-eradicating force of robots by distracting them. He does this by tossing a distinctly non-digital chair in the air.

For reasons that are unclear yet convenient, Gene and High5 escape from the the delete bots. High5 brings them to a basement area referred to as the “Loser Lounge.” Characters of abandoned luggage, and a fish cake with a swirl play cards, but I have to question the inclusion of the eggplant here. That symbol has been a ribald staple of texting. Just saying…

Bear with me now, as the weak script meant they have to untruck a fair amount of exposition. High5 states that what would solve Gene’s problem is to be reprogrammed. They would need to leave Textopolis, thereby leaving the app to go seek out a hacker app and find a hacker. One emoji is said to have escaped this way and now lives on the Cloud. High5 is convinced to join as he, too, can be reprogrammed and get back into the “favorites” section. All of this ushers us nicely (laboriously) into the second act.

They enter the piracy app which resembles a large saloon populated with — yes, pirates. They are looking for a hacker named Jailbreak. They meet other negative entities such as trolls, viruses and spam. The tedium created by all the compulsory and uncreative elements makes me want to reach for my phone.

After finding Jailbreak she is uninterested, but the delete bots now enter the bar and the reluctant hacker decides to help Gene and High5. Jailbreak knows of a secret digital tunnel and they slide out in a tube of binary figures. They end up in Candy Crush land, with Gene stuck in a game board as a yellow lemon drop. There is absolutely zero explanation given why any of this happened, or why it is supposed to make sense.

Due to Gene’s shenanigans the apps on Alex’s phone have been acting up. He schedules a visit to the cellular dealer to erase the phone and reset the functions. This causes panic in the boardroom at Textopia. It makes me wonder how engaged kids were with this movie; it’s causing apathy in my head.

To get onto the cloud the trio needs to get to the DropBox app, which is right next to the Dancing Game app. There is a painfully long sequence of them needing to play this game. As they do Alex’s phone goes off in class, so he deletes the game. This leads to them needing to escape into the next app. Just before they make it however a delete bot grabs High5, and they fall into the void. This is presented as bad news, but it made me happy instead.

High5 is determined to be in the trash file. And, as they’re about to enter the DropBox app Gene says they need to rescue him first. Then we get some extremely shallow wisdom dropped in our lap. (Or, “app”?)

JAILBREAK: “I’ve always just thought, you gotta look out for Number One.”

GENE: “Well, what good is it to be Number One if there aren’t any other numbers?”

There is a discussion in the Textopolis boardroom about Alex erasing his apps. Upon mention of the phone being “wiped” a joking reference was made towards Poop emoji. This matches other high-brow gags involving Poop, including the word “soft.” not needing to wash hands in the bathroom and being “Number 2!”

In order to get to the Trash file they have to go through Spotify and ride some song streams. This allows for a music montage and the chance for Gene and Jailbreak to develop feelings for each other. Ironically I’m beginning to feel nothing.

They retrieve High5 from the Deleted file. Stirring news, I know.

While all three are meandering around the phone wallpaper an upgraded delete bot arrives. Our trio dodges it and separates to avoid being rendered. This may have been more dramatic had we not already seen the lower grade bots randomly deleting numerous entities immediately inside the pirate app earlier.

A firewall stands in the way of entering the Cloud. The reason Jailbreak wanted Gene was that his ability to recreate so many emojis meant she could use him to attempt numerous passwords to get past the firewall without being locked out. After numerous attempts — leading to painful flaming denials issued upon Gene — High5 recalled a deleted email he saw while in the trash. They try the name of the girl Alex has a crush on and they get through. Now everyone has served a specific purpose.

Once in the cloud Jailbreak says she’ll begin hacking to reprogram Gene, and he tepidly agrees. They both look reticent about this. I am unclear as to why, since they both came to the cloud specifically to do JUST THAT. But now everyone is sad about it. And as Gene tries to profess his affection Jailbreak kind of spurns him. So now he has turned, naturally, Meh. Yet this…is now bad…? I have absolutely no idea how I am supposed to feel about any of this.

As they stand back and marvel at the sprawling opulence of the Cloud I was struck that it may have been a bad idea for the design team to replicate the towering metropolis from the wretched “Jupiter Ascending.”

A mopey Gene gets dragged by a delete bot back into the phone, just as Alex is in the cellular store to get his phone wiped clean. In order to rescue Gene in time Jailbreak reveals she is actually a princess emoji. That means she can summon the Twitter bird for them to fly back to Textopolis. I don’t even know what I am supposed to care about any longer.

Instead of being deleted instantly (as we have previously seen) Gene is brought back to Textopolis headquarters — where it is then declared he must become deleted. But his parents step in to stop it, and then Jailbreak and High5 crash into the scene as well. Jailbreak gets to a shutdown panel on the bot and “saves” Gene — even though there are still dozens of delete bots running around looking for him, but whatever.

At the store the kid has his phone set to be wiped. Gene hits upon an idea to create a multi-reaction emoji, so Alex will see it and send it to the girl he likes. Once she sees it, he thinks, she’ll talk to him (because she happens to be in the store). Then he’ll decide to not wipe his phone. This plan happens to work out at the very last moment — mostly because it has taken well over four minutes of screen time to delete the phone.

Alex disconnects his phone, and all the phone content that took forever to delete is re-installed in a flash. We hear, “Gene – you did it! You saved us all!” So this is regarded as a happy ending. You know — until four months later when Alex gets the next phone upgrade.

In a post-credit scene the Smiley emoji is shown in the basement playing cards with the Loser Lounge images, implying she is no longer running Textopolis. Why she is outfitted with dental headgear is not explained. That is just in keeping with the numerous other elements we have been presented which had no bearing on the story. 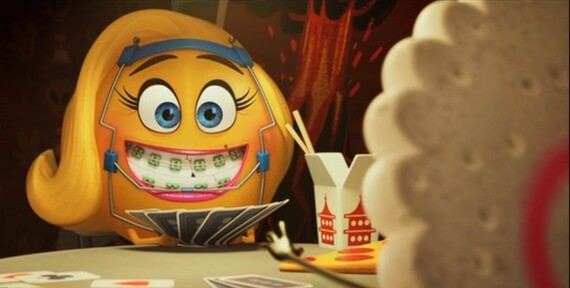 To call this attempt at entertainment “unneeded” is a blatancy. There was no discernible reason for this to have been made. Nothing edifying arose, nothing revealing was presented, and even the chance at a 90 minute diversion was a failure.

What the creators do not grasp is that they presented as their main character the very same emotional reaction their movie evokes. I would suggest aiming higher, but when you begin with emojis as your premise, there is nothing more to which you can aspire.