The director of the “Guardians of the Galaxy” franchise lost the gig after his old pedophilia jokes surfaced.

Disney reluctantly fired James Gunn, and the studio is now searching for his replacement.

It’s safe to say Scott Derrickson’s gig as the man behind the “Doctor Strange” films won’t suffer a similar fate even though one of his toxic Tweets is only a few hours old.

And, like an embarrassingly large sub set of the group, his Trump derangement takes him into some dark directions.

Take his Saturday afternoon Tweet. The director, a self-described Christian, goes out of his way to not just slam Trump as a white supremacist but anyone who supports his policies. 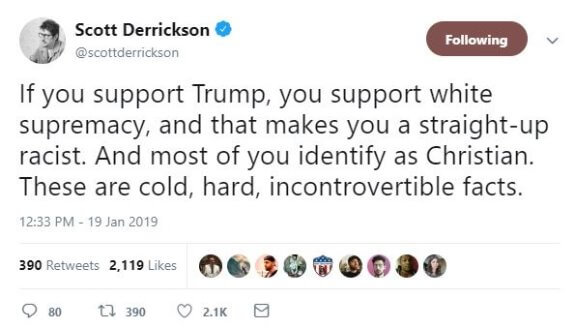 Now, in a sane world Disney, which oversees the Marvel Cinematic Universe (MCU), might be sad to see one of its directors slam a group of potential “Doctor Strange 2” patrons. Any MCU film is guaranteed to make money, but these films must earn millions to compensate for their massive budgets. And let’s not forget the marketing campaigns that splash these heroes across cereal boxes, McMeals and other consumer goods.

Every ticket sold matters. It’s probably why Disney films haven’t been as woke as other product. That’s starting to change with the progressive “Last Jedi, though. Even Disney’s recent “Solo” featured a woke robot character.

Still, Team Disney will likely ignore this missive. Here’s why:

For Thanksgiving 2017 he shared a Tweet calling American Christianity “racist, greedy and nationalistic.”

Earlier this month, he attacked his fellow Christians anew, saying, “In America, we Christians are not the solution. We are the core problem.”

Last month, he threatened to leave Twitter after receiving blowback from film critics on social media.

“If I keep getting personally attacked by film critics I will leave twitter. They will win. I cannot afford to have them souring my name to other critics and filmmakers. It’s consequential,” he wrote. “And none of them come at me directly. That would at least deserve a smidgeon of respect.”

Derrickson’s most recent Tweet drew plenty of agreement from fellow Trump Derangement Syndrome sufferers. A few fought back, though.

Who are you to judge what people think? The whole “if you disagree with me you’re ___” game that you rich babies play is old and tired but go ahead continue virtue signaling, hell, I don’t even like trump but you lot make it difficult to root against him