When my children were young I read to them every chance I could.

My favorite read-aloud books entertained and educated my kids, contained interesting illustrations and had text that tickled my adult funny bone. The best of them raised questions and prompted conversations between reader and listener.

The very best occasionally sent me looking for my own dictionary.

I was (and am) a libertarian-leaning, well-educated, conservative dad with little patience for those who would pollute my kids’ minds with arrogantly-held, economically illiterate beliefs. Combing through the children’s departments of local bookstores, I would search for intelligent, fun-filled books and try carefully to avoid those that were full of what I have come to think of as TUSC – the usual socialist crap.

Why Some Books Are an Endangered Species

The task I set myself was hard then; unless things change, it will be nearly impossible by the time I have grandchildren who I want to ply with books. Half of America is a coastal, liberal elite; the other half is a basket of Deplorables.

Only the “elites” are publishing kids’ books. 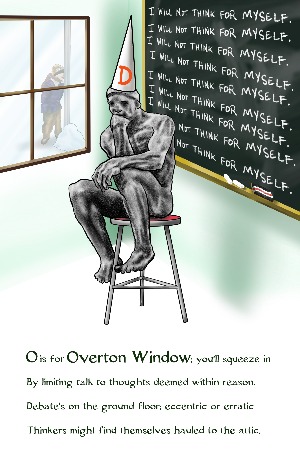 We Deplorables have our serious political tomes. We have religious literature for the believers among us. And we know certain authors and genres that reliably produce non-political, apolitical, or slightly right-leaning entertainment.

But well-written, entertaining children’s books with an anti-TUSC message are extremely rare.

As network and cable news outlets learned when Fox News broke their cartel, a gaping hole is waiting to be filled – profitably, one would hope – by someone who appreciates and can comfortably reach out to this largely-ignored audience.

In my early 60s, self-employed, working from home and unable to shut off the XTC earworm of Colin Moulding’s lyrics (“He’s always saying what he’s gonna do . . .”), I decided to see what I could do along these lines.

RELATED: The Left Ruined the Oscars and the Super Bowl … What’s Next?

Starting last October I drafted 26 short verses, one for each letter of the alphabet, defining political terms. “A is for Anarchist” first struck me with its potential mocking humor. “K is for K Street” came last, after a long period as “Keynes” that never really worked.

In between, I had fun with Boondoggles (B), the Deep State (D), Rush Limbaugh (L), Talking Points (T) and YouTube (Y).

I went looking for a publisher or literary agent who was accepting unsolicited submissions (a fairly short list), whose track record indicated a potential interest in libertarian-conservative political humor (a much shorter list), and who might be willing to work with a first-time author whose work did not fit into a single, existing genre.

I wrote them all and got some nice “ding letters” back. A few of those contained genuine words of encouragement and were not obvious form letters.

Aiming only at traditional publishers, I accidentally submitted my text to a “hybrid publisher,” local to me in Northern Virginia, and willing (of course) to publish my book. I met in person with the publishing team and was surprised and impressed. Luckily, the process took quite a while, giving me time to become unimpressed, see the pitfalls and money-sucks and decide to truly “self-publish” by engaging my own illustrator, website designer and printer.

Somewhere in the middle of this muddle, I formed a bond (and a contract) with a top-notch artist I found on Upwork, and he has done a terrific job of illustrating the book. Kyle Fleming became the Ralph Steadman to my Hunter S. Thompson, the Teller to my Penn, and the Bernie to my Elton.

Somehow, most of the time, he and I were in sync on what the book needed. And when we weren’t, Kyle took my suggestions in stride and implemented them perfectly.

Introducing a Fresh Spin on a Classic Format

“Doctor Deplorable’s Political Characters A to Z,” which will be sent to the printer shortly and should be ready for distribution in late March, is a send-off on the traditional alphabet primer. The book is written by “Doctor Deplorable” (a bald eagle with red, white and blue design elements and a stethoscope hanging around his neck) and then “translated” by me from the original Deplorable.

The name of the author is meant to signify a political position and an attitude, in the manner of P.J. O’Rourke’s Republican Party Reptile. If things go well, “Doctor Deplorable” may become more than just a pen name; perhaps someday our bald eagle will help parents shop for other TUSC-free products.

My immediate aim, though, is to publish an illustrated book that is enjoyable, funny and more than a little subversive. (Think Yertle the Turtle meets Mad Magazine.) The targeted adult audience for this book should find it witty and fun to read and might enjoy it as a coffee table book.

Perhaps some will even read it to their kids, as I originally intended. One can only hope.

“Doctor Deplorable’s Political Characters A to Z,” translated by Mike Zelenty and illustrated by Kyle Fleming, is due out in late March. It is available for purchase on a strictly effjeff basis (no Amazon) at www.doctordeplorable.com, where you can also check out sample pages and FAQs.