That subtext gives “Dementia” an added coat of horror, but the thriller hardly needs it. Star Gene Jones remains one of Hollywood’s best kept secrets, and the film’s big reveal spikes the chills without shortchanging the narrative.

Best of all, audiences will emerge from “Dementia” doubting their initial observations. Not shabby for a low-budget horror film competing against a sea of Oscar-bait product.

Dementia - Official Trailer I HD I IFC Midnight
Jones plays George, a Vietnam veteran who suffers a stroke in the film’s opening moments. His estranged son (Peter Cilella) arranges for a live-in nurse to help the old warrior heal. Only the nurse in question (Kristina Klebe) doesn’t have George’s best interests at heart. 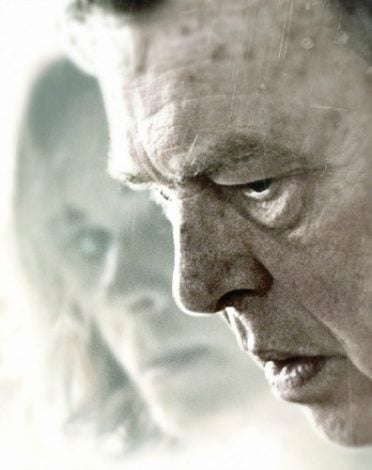 She is sporadically cruel, casting George’s complaints about her behavior as a side-effect of his dementia. Only Shelby (Hassie Harrison), George’s granddaughter, suspects his nurse isn’t quite what she appears to be.

“Dementia” isn’t content to tell a nurse versus patient yarn. George’s Vietnam flashbacks include time spent as a prisoner of war and a pain far beyond what his captors inflicted.

He’s grappling with his own sins, including his negligent parenting and a serious drinking problem.

He may be a war hero but he’s hardly been heroic on the home front.

Jones, so good in 2013’s “The Sacrament” he should have heard some Best Supporting Actor buzz, is outstanding as a senior straining to see through the mental fog. The actor grants him a dignity that goes beyond the otherwise solid script. George serves as a wobbly narrator all the same, which makes the nurse’s behavior even more unsettling.

Yes, some of the third-act revelations arrive faster than they should. And the pieces fit a tad too snugly together, something a bigger budgeted film might have fleshed out. They’re still rooted in the story and characters, and director Mike Testin understands we’re fully invested in George’s recovery by the time the horror tropes emerge. Klebe is suitably sinister, but the story forces her to reveal too much, too soon.

“Dementia” delivers more than just some well-choreographed jolts. It provides that rare showcase for an older actor, particularly in a genre obsessed with youth.

DID YOU KNOW: Gene Jones appeared in theatrical productions for roughly 30 years before making a splash with a small, but unforgettable role in 2007’s “No Country for Old Men.”