That isn’t an insult. It’s just a fact and one horror directors are slowly starting to savor.

The “Jug Face” actress, alternately beautiful and haunting, is our modern Scream Queen. Only the 21st century version doesn’t have her running away from masked killers, scantily clad and screaming ’til she’s hoarse.

No, movies like “Darling” show she’s in charge. For better and worse.

Carter stars as a young woman tasked with watching over a very old, and regal,Manhattan home. The house’s owner (Sean Young) tells her the last caretaker’s time didn’t end well. Not to worry, though. Nothing will happen while she’s in charge.

We learn soon enough that won’t be the case.

Carter’s character, dubbed “Darling” but never named, finds her mental state compromised by the home. She hears the incessant sound of a ticking clock. The rooms are all empty, but each carries a memory, a flash of something frightening. And simply leaving the house for a spell doesn’t seem to help.

Shot in creepy but effective black and white, “Darling” is a tone poem disguised as a narrative feature. It’s an expert blend of ghastly music cues, quick cuts and a supernaturally odd turn by Carter. It’s hard to imagine another actress better suited for such a singular role.

Director Mickey Keating (“Pod,” “Ritual”) both rushes and luxuriates in the sprawling, intensely white New York home where “Darling” takes place. Once more the house is another character in the story,and it must be given the narrative limitations. 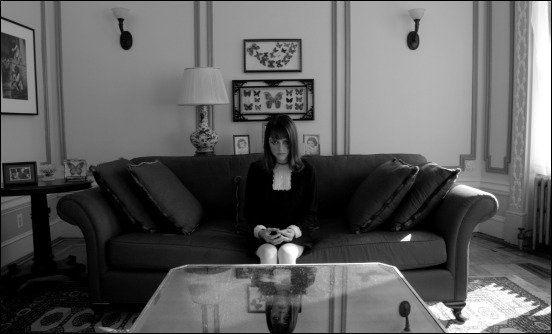 Keating’s black and white visuals spare us from some ghastly sights. That artistic choice pays off in other ways as well. The story smacks of another era, what with its old-school telephone (and that braying ring) and a lack of modern flourishes.

Wouldn’t a lonely young woman go online to connect with other souls?.

“Darling” ends in well under 90 minutes, and even with scenes that feel padded it’s hard not to want … more. Jack Nicholson’s descent into madness during “The Shining” required patience and a slow but steady mental decline.

Keating doesn’t have time for that here. That renders “Darling” a brash experiment in horror techniques. The execution is near flawless. The storytelling is an entirely different matter.