Jane Levy stars as a burglar who, along with two cohorts, target the worst possible house. The home’s owner, a blind Iraq War veteran, seems like easy prey at first blush.

This critic found “Don’t Breathe” to be a treat in this sorry summer movie season. Solid performances, including an eerie turn by Stephen Lang as the “victim,” contribute to the roller coaster ride.

Matt Morava: You’re right, I hated it. HATED IT. In a year of over the top violence (“The Purge: Election Year,” “Batman v Superman” and “Suicide Squad”) this was by far the worst.

Everything about it seemed exploitative: the “crazy vet” stereotype, using urban decay in Detroit as a backdrop and the three unmemorable teenagers with whom we’re meant to feel empathy for because they have it rough at home. 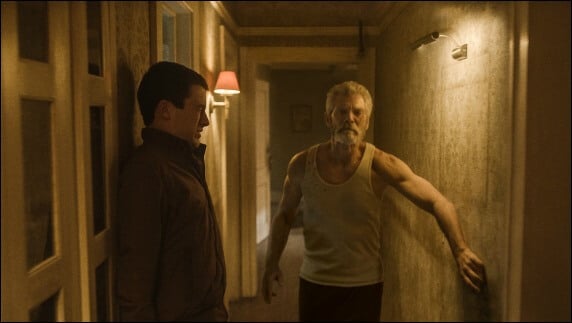 Like in the equally awful “Suicide Squad,” the lack of coherent ethics on the part of the protagonists leaves a lot to be desired. Viola Davis’ Amanda Waller kills four hardworking FBI agents in cold blood for zero reason and nary a peep from the protagonist. Here, you have three teens breaking and entering, and it’s all “okay” because mom’s an alcoholic and kinda mean.

Christian, how given the violence, torture and ridiculous motivation of the bad guy can you recommend “Don’t Breathe” to anyone?

Christian Toto: I liked that the film gave us a glimpse into the lives of the burglars. I didn’t think it excused their actions. It was a rare blast of context in a a genre that often skips that.

I’m the first to shred Hollywood for mocking war veterans. This case, though, is more sophisticated. The blind vet is defending his turf, and he’s suffered much more than the loss of his eyesight. Those two qualities make him a worthy adversary for the burglars.

I did find the third act reveal to be a bit silly, but by then the movie had hooked me. So many tense moments. Such good use of light and shadow. And Stephen Lang’s visceral performance as the blind man fascinated me.

Violence wise? It’s a horror thriller. You have to really shove entrails in my face to make me complain.

Didn’t you find the cat and mice games exciting? Wasn’t the fact that he was blind intriguing to their standoff? What part of the violence would you have cut (no pun intended)?

Matt Morava: I agree that Stephen Lang is the best thing going in this mess. Yet it wasn’t enough to keep me interested.

It samples far too much from better films like “Cujo,” “Silence of the Lambs,” “Funny Games (1997)” “The Descent

” and the reigning champ of cat and mice games, “Wait Until Dark.”

The problem I have with the violence isn’t with the visuals, it’s with the lack of a coherent context. Take “Hostel Part II Unrated

” for example, plenty violent, and similar in that it follows a female protagonist get out of a hairy situation.

Everything that happens, though, connects coherently to a larger context. Here, we lead up to the most ridiculous bit of horror every filmed, and I won’t give it away, but it involves a turkey baster. I literally LOL’d, and that’s never a good thing in a horror movie.

I’m trying to put my finger on the exact moment I started really hating this film. I think it began with using the urban decay in Detroit. It would have been a thousand times more interesting to have it set in a wealthy thriving suburb of say outside of Atlanta. The “crazy vet” thing could’ve been avoided all together and just focused on blind man who’s fighting for his life.

And they could’ve written it in a way to care more about both sides. I’ve got crazy pants on one side and three kids who’ve done nothing to earn my empathy on the other. Just a wee bit more investing in building up the two sides and more discipline in the use of violence once their in the house and skip the Cujo thing entirely and you might have had something worth seeing.

Instead we’re left with this mess of a movie.

Christian Toto: Well, I’m not gonna defend the turkey baster … even if it struck me as an original note in an otherwise shopworn genre.

I didn’t mind the film’s setting. If they had the kids coming from fairly affluent families, it would have been harder to root for their survival. As is, one of the three kids was more or less going along for the ride with a heaping helping of unrequited crushing.

Making Lang’s character a military veteran allowed him some skills other blind folks might not have. So I think that bit of background helps.

I loved the recent Netflix horror film “Hush,” which featured a deaf protagonist. To me, this offered a clever wrinkle along similar lines. Didn’t the “don’t breathe” gimmick get you on any level?

Matt Morava: It didn’t work on any level for me. I was exhausted by the end and was downright gleeful to leave the theater.

The final thought I’ll give this movie is that whomever was in charge of marketing should get a huge bonus because they really sold the film as a thoughtful, suspenseful horror story. What you got instead was a paint-by-the-numbers home invasion story with a few regrettable twists.

This thing was a turkey that could’ve done without the baster.