“All politics are downstream from pop-culture” is the first thing I learned from Andrew Breitbart.

It changed the way I looked at film, television and publishing.

The political results of spoon-feeding Americans left-wing values through popular entertainment for roughly 40 years is self-evident to anyone paying attention.

Every half-baked idea you see young folks embracing was first sold to them wrapped up in a story or ad campaign crafted by a Washington and Wilshire nexus.

When big Hollywood corporations cater to a global audience, they choose to do so by mocking American history, culture and institutions, which is not necessary for storytelling unless it’s part of an agenda. The anti-American themes are a direct result of the creative decision making by power players who are determined to forever change our culture to suit their bottom line, not your quality of life.

I first noticed this intentional, subtle assault on American integrity back in 2003 when I attended the premiere of “The Bourne Supremacy.”

I seemed to be the only person in the audience to notice that every European police and intelligence agency ran smooth and with authority. The U.S. bodies, by comparison, teemed with bumbling idiots tripping over themselves.

Watching “Bourne” is when I first started to take account of all the intentional slights in media. That “symphony of bias” nudged young folks to question their world as fake and pointless compared to the “utopian world” as, you guessed it, defined by global elites who sit comfortably in positions of power and influence.

Woke culture is the predictable end point for a movement based entirely on “controlling the narrative.” Thankfully, Americans are now aware of the cultural cold war that’s been on-going for decades with only one side being heard.

Stories really are food for the brain, and the folks in charge of what gets the greenlight at the cinema are simply masters at making junk food entertainment.

If you’re a creator of any kind it’s time to treat Hollywood like the last option for your material instead of the first.

For the most part, the promise of fame is the force that draws most young dreamers to town. It’s the allure of worldly power that inspires folks to give away their best story ideas, never to be seen again. Do not make that mistake, instead take advantage of the liberating tools of technology and produce and distribute your own material any way you are capable.

Change the culture by ignoring the old one like the chintzy Vegas sideshow it has become and focus your energies on creating something you can own and sell.

That’s why I turned to publishing novels instead of writing screenplays.

“Crisis Moon” – a space adventure about conflict with China on the Moon, is my second book and also a direct attack on the Hollywood business model in its own small way.

“Crisis Moon” started as a screenplay many years ago and was very well received until the realities of Chinese influence killed its potential. The reason a movie like “Crisis Moon” will never be produced in the year 2020, is because the Chinese box office is more valuable to American movie companies than American box office is.

If Hollywood paints China in a negative light, studios would be banned from releasing movies there.

China’s Influence On Hollywood Is Growing, Changing The Films You See | TODAY

So in exchange for an increased corporate profit, we Americans must abide by the constricting rules of Communism when creating our work.

“Crisis Moon” is more than just an exciting and fast-paced space adventure on the Moon. It’s also a 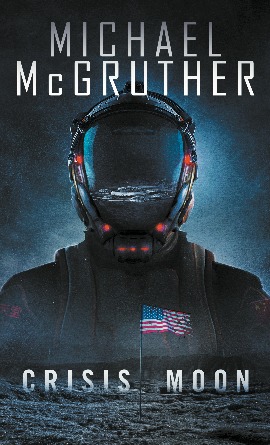 book about the vital importance the private space sector has when the government is ill equipped to respond. It’s about the American ideal of doing it yourself and loving what’s behind you enough to sacrifice your own life.

The book also touches on the pride felt by being the first nation to land humans on the Moon, while also showing a frightening picture of a possible future.

Eventually the symphony of new ideas will be so loud, everyone will listen again.

Michael McGruther is a screenwriter, author and publisher. He has worked in the entertainment industry for 27 years. His professional writing career began with the original screenplay “Tigerland,” which was directed by Joel Schumacher and starred Colin Farrell. “Crisis Moon” is the second book released under his publishing imprint Hosel & Ferrule Books.