Not “A Country Called Home.”

Imogen Poots stars as a city girl going home for her father’s funeral. “Home” means a tiny Texas town with little to offer. Yet she doesn’t want to leave, even though the screenplay can’t stop making the locals look bad. Real bad.

Audiences will be eager to flee “Country,” which offers an appealing lead and not much else.

Ellie (Poots) is eking out a living in L.A. when she learns her father has had a stroke. They’ve been estranged for years, but he may have only days, if not hours, to live. So Ellie leaves her no-good beau for Texas, where pappy has spent time drinking himself into the town’s not-so-good graces.

She misses her father’s final breath but vows to help with the funeral process. That means dealing with his trashy galpal (Maureen McCormack, “Private Parts”) and grandparents she never got to know (including the radiant June Squibb).

There’s also a single father (Ryan Bingham who also wrote “Country’s” elegant score), one of the town’s few people of integrity. The film’s only mystery, beyond why Ellie would want to stay a nanosecond longer in town than she needs to, involves a key daddy left for her.

The town’s most sympathetic character is Reno (MacKenzie Davis), an androgynous crooner who keeps Ellie company when she’s down. Which happens to be a lot.

“A Country Called Home” is depressingly one note, from its harsh view of small towns to Ellie’s mopey persona. The few attempts to shake that tone come off as insincere. A senior citizen fashion show packs a clumsy surprise. So does a jolt of vandalism, aimed at one of the town’s resident hate mongers.

Even the local mortician turns out to be a jerk.

FAST FACT: Imogen Poots said Christopher Walken was so funny on the set of “A Late Quartet” she was often shaking from laughter.

Poots’ beautiful eyes water through much of “Country.” That’s understandable, and the actress can carry a moment with just those moistened looks. Her scenes with Bingham generate a low-key chemistry, and what follows tracks the expected course. The other emotional beats arrive like clockwork, wholly expected and minimally rewarding. 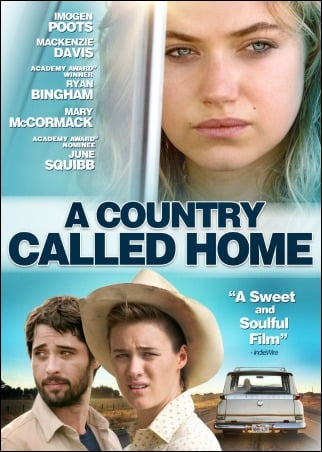 The film wisely casts the great Shea Whigham as Ellie’s brother and then gives him but one short scene. Here’s betting there’s more of him on the cutting room floor, perhaps with other scenes showing some grace notes afforded the townspeople.

Even the few decent characters get tarred by director Anna Axster, who co-wrote the screenplay. A single dad worries he may not be the biological father of his child, hinting he’d scram based on the results.

An elderly couple, the film’s rare personification of small-town decency, turns out to be shallow church goers during an awkward reveal.

“I sleep through a lot of the praying part,” the senior confesses about his regular church visits.

“A Country Called Home’s” disdain for “flyover country” is obvious. What’s far more troubling is how little is has to say about anything else.