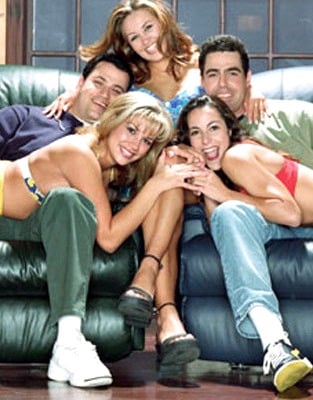 “The Man Show’s” signature visual? The Juggies, a team of bikini-clad women jumping on trampolines.

Could “The Man Show” air today given the P.C. sensibilities handcuffing today’s comics? Pop culture teems with gender-bending storylines and characters, part of a push to show men and women are more alike than we assumed. How would the media react to a show that beat its chest about what it means to be a testosterone-fueled male?

Kimmel and Carolla have moved on from “The Man Show,” each securing a larger, more influential platform. “Jimmy Kimmel Live” is a late-night staple, producing some of the most popular viral videos in memory.

Neither Carolla nor Kimmel would blink before revisiting elements of “The Man Show” even if they’re too busy to “man” a full-bodied reboot. Hollywood is addicted to rebooting popular properties both old and fairly new. Consider NBC’s “Heroes Reborn” as a prime example of the latter.

That doesn’t hold true, necessarily, for Comedy Central. It might not be up for such a reboot.

In 2010, the network put a black box over the face of Muhammad during an episode of “South Park” while bleeping out any mention of the Prophet’s name.

Earlier this year, Comedy Central edited out some Paul Walker jokes during a roast of pop superstar Justin Bieber. The channel’s roasts are designed to encourage any gag, no matter how distasteful, to get a fair hearing. That doesn’t always play out as planned.

Even if Comedy Central wanted a “Man Show” reboot other cultural voices might rise up in protest. Consider the following “Man Show” sketches and ask yourself if today’s Social Justice Warriors would let them air without a fight: