But in the wake of Conan O’Brien’s historic visit to Cuba last week, Kiley sat down with the hosts of the “Pajama Party” podcast – Christina Myers, Andrew Monheim and Carl Kozlowski – and gave the inside scoop behind that Cuba trip.

He also tells the hosts how he became a comedy writer, what happens on those rare occasions that O’Brien botches a joke and the behind the scenes antics of the show’s trip to Finland.

The entire interview can be heard here on the latest episode of the “Pajama Party” podcast from the Radio Titans network. Here are some highlights:

Can you give us a preview of anything from the Conan goes to Cuba episode? How did that come about?

Brian Kiley: Conan’s a big history buff, and I think the idea of “OK, we’re gonna stop this embargo and we’re gonna recognize them” or whatever—I think he thought, “let’s do this before somebody else does and get in there.”

Did the people there know what the hell was going on?

Brian Kiley: No, they don’t know him! Our show’s not on there, and they don’t have the Internet.

Was there a big audience? Was he in a TV studio?

Brian Kiley: No, no he was actually just going around with a remote crew. He took a dance class. And as a communist country, the state owned the restaurants. Now that it’s opened up, people can actually open up a restaurant in their private home. So he went to somebody’s home. It’s kind of like a restaurant, but it’s also like hanging out in someone’s living room. 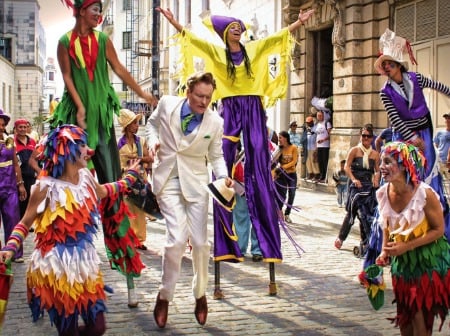 Brian Kiley: No. When he goes out with a remote crew we might pitch the place that he goes to, like “Oh, if he takes a tango class…” But once you get there, you can’t really script that.

How did you end up writing for this show? Was this like your childhood dream?

And then a couple of friends of mine got hired at Conan, ’cause it had just started … So, somebody got fired and they were looking for a new monologue writer. I used to do a lot of topical jokes in my act, so I just kind of wrote up like 50 jokes and sent ‘em in and they were like “OK, you start tomorrow.” So, I’ve been there almost 21 years. It’s kind of sad. The group now, though, for the most part they’ve been there awhile.

Since you’ve been with the show for so long, now that you have the online stuff as well do you find yourself having to write double the content? Do you have to do extra stuff for online?

Brian Kiley: It’s a little bit weird now, because it’s all about the clicks and how many people are clicking stuff. And our audience is so young, for the most part people aren’t sitting down at eleven o’clock. A lot of people are watching it on their phones, or the next day they’ll watch a certain bit. The promo department, if an actress says something about showing their boobs in a story, that’s gonna become the headline for the click. Things like that.

Are you involved in that process?

Brian Kiley: No, and it kind of appalls me. Sometimes the clicks are deceiving, like it’ll be Condaleeza Rice and she didn’t really show her boobs, she was calling someone an idiot or something. They’ll kinda take some liberties.

With the history of ‘SNL’ having just been run everywhere on account of the 40th anniversary, they admitted who some of their best and worst guests were. Who’s one of the best and one of the worst guests you’ve had?

Brian Kiley: Well, Martin Short is always great. Steve Martin’s always great, although he hasn’t been on a lot. Martin Short’s been on a lot. Someone like that, they always bring stuff. Tom Hanks always brings stuff. What’s interesting with him is he’ll be on, and he’ll call up a week before and talk to the segment producer like “What can we do?” He doesn’t just come on and talk, he brings something interesting or they’ll do a bit.

Carl Kozlowski is an occasional contributor to Breitbart.com’s Big Hollywood, as well as a critic for the Catholic News Agency and Movieguide, He is the arts editor and film critic for the Pasadena Weekly and the founder of the podcasting station Radio Titans.